I cannot survive in a 140- or 280-character world, so here are more tweets that grew up to be too big for Twitter…

No, those weren’t “Loooooooous” you heard from the rabble on Friday night at Football Follies Field in Fort Garry. Those definitely were “boooooooos.”

The thing is, I’m not convinced that Matt Nichols was the sole target of fan disenchantment.

I’m inclined to think that a large percentage of the chorus was wailing in protest of the scalp-scratching decision-making of Winnipeg Blue Bombers head coach Mike O’Shea rather than starting quarterback Nichols. O’Shea just can’t seem to get out of his own way, even in a lost cause and, be certain, by the time the boos rained down on the large lads in blue-and-gold trim on Friday, this was a no-hoper. Winnipeg FC already had been sufficiently flogged, down by three major scores with a mere four minutes and 14 ticks remaining until full time, so the mop-up chores should have been left to Nichols’ understudy, Chris Streveler.

But no. That would make too much sense. Let’s take the illogical route instead and send the wounded starter back into the futile fray and permit the Bytown RedBlacks to batter him some more. Which they did, of course, sacking Nichols twice in garbage time of their 44-21 victory.

This sequence of events was the product of sound reasoning to absolutely no human other than O’Shea, a rather peculiar man once you prop him up on the sideline and fit him with a headset.

To recap, Nichols suffered an owie to the elbow on his throwing wing. O’Shea ushered Streveler into the skirmish and, given the untidy score and circumstance, it was assumed that he’d clean up the mess. Well, kids, he directed half a dozen plays, then gave way to Nichols at the whim of O’Shea. Which begged the question: Did it occur to the head coach that he might want to give Nichols the rest of the night off, thus providing the neophyte Streveler with some real-time grooming?

“No, it didn’t,” O’Shea advised news snoops after the fact. “Matt gives us the best chance to win every game.”

Win? Did he say win? It was 44-21! There was 6:23 showing on the scoreboard clock when Nichols initially departed, and only 4:14 when he trotted back onto the field to expose himself to further punishment from the RedBlacks and the ridicule of an angry mob. Win? Good luck with that. Donald Trump’s presidency has a better chance of a happy ending.

So, ya, like a lot of you I was PO’d and barking. Not at Nichols, though. At O’Shea.

It’s this kind of dopey, short-sighted coaching that has the Montreal Alouettes in a world of trouble. For years, the Larks put Anthony Calvillo behind centre regardless of the score. Backup QBs took snaps about as often as a nun cusses. Calvillo had to be carted away in an ambulance first. Well, the Als lost Calvillo to a concussion midway through their 2013 Canadian Football League crusade, and the Larks haven’t had a winning season since. Mainly because they kept any and all would-be heirs to the QB throne confined to the sideline. It’s a lesson the stubborn O’Shea chooses to ignore, so don’t expect him to toss any scraps Streveler’s way. Unless, of course, someone higher up on the pay scale has a chat with him about QB protocol and the big picture.

No surprise that the chirping of the boo birds reached Nichols’ ears (“Ya, absolutely”), but I didn’t expect him to deliver a public gripe after the fact. “I usually wouldn’t say anything like this and I probably even shouldn’t, but I’m going to,” he said. “The saddest thing tonight, for me, was…I feel like I give my heart to this city and this team…um…ya, I don’t care…um…it’s pretty frustrating to, you know, I put everything into going out there and try to perform for my teammates and these fans. It was pretty sad for me. You know, I took some shots tonight, took a big one on my elbow, had to come out for a couple plays, shook that one off, came back on the field and got booed by the whole stadium that I was coming back out there. That one was pretty hard for me tonight.” Again, I’m not convinced the majority were giving Nichols the Bronx cheer. I believe much of it was aimed at O’Shea. 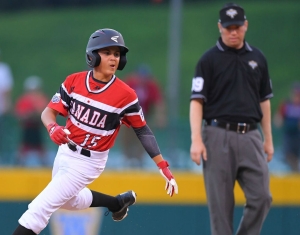 I love Little League baseball, but not when I’m supposed to be watching the CFL on TSN1. It’s total BS that suits at TSN determined a kids rounders game between Panama and Canada in the prelims of the Little League World Series would pre-empt the Winnipeg FC-Bytown joust. Who made that dumb call? Mike O’Shea the new program director at TSN? Because of it, I (we) missed all but the final four minutes of the first half from Pegtown. Turns out so did the Bombers. They also skipped the second half and, upon further review, I suppose we should have, too. Still, the shallow thinkers at The Sports Network might want to schedule tiny talent time for their boondock channels—TSN 3-4-5—and put the large lads in pads on the main feed next time around.

How is it that everybody who watched the Alouettes-RedBlacks game on TV a week ago Saturday knew Montreal QB Johnny Manziel was concussed, but medics on the sideline didn’t have a clue? Where’d they get their diplomas? At Skip Your Class U.?

I must say, Antonio Pipkin from noted football factory Tiffin University showed me more in one half of football than Manziel did in two complete games as the Als starting QB. The Larks were ragdolled by the Edmonton Eskimos, 40-24, on Saturday, but that loss is down to a defence with more leaks than the U.S.-Mexico border. Pipkin’s numbers were modest—14/25, 217 yards—but he ran and tossed for touchdowns, something Manziel hasn’t managed.

Duron Carter must be a nasty bit of business. Seriously. Few players in the CFL have his special kind of talent, but here we are, more than a week after he was cut adrift by the Saskatchewan Roughriders, and there are zero suitors for the wide receiver. The Alouettes will trade for a guy who beat up a woman, but they want to part of a Duron Carter redux. Makes me wonder.

You know we’re in the dog days of August when the National Hockey League shifts into slo-mo. I mean, the Ottawa Senators are in no hurry to move Erik Karlsson. Maple Leafs forward William Nylander says there’s “no urgency” to sign a new deal in the Republic of Tranna. Patrik Laine says “there’s no rush” to put his signature on a fresh contract with the Winnipeg Jets. I think it’s safe to say that Josh Morrissey is in in no hurry to re-up with les Jets. Nor is general manager Kevin Cheveldayoff in a hurry to get back from the cottage. It’s as if everyone is sitting on the front porch with Andy, Barney and Aunt Bee in quiet, unassuming Mayberry, U.S.A. Question is: What’s the over/under on when the stuff hits the fan? One week? Ten days?

Thought this was interesting: Troy Westwood of TSN 1290 in Good Ol’ Hometown asked Twitter followers to name their all-time Jets starting lineup, including players from the World Hockey Association and both NHL versions. Mine would be Bobby Hull, Kenta Nilsson and Anders Hedberg up front, the Shoe (Lars-Erik Sjoberg) and Teppo Numminen on the blueline, with Nikolai Habby-boooolin in the blue paint. Kenta was the most skilled player to ever wear Jets linen, and it’s a total joke that the Shoe isn’t in the Jets Hall of Fame.

On the subject of Hall of Famers, Eric Lindros wants to eliminate bodychecking from hockey. Not just kids’ shinny. All hockey. Including the NHL. That’d be like taking Don Cherry off Hockey Night in Canada. Come to think of it, I’d be all-in for some of that.

I’m liking what I hear from Anders Nilsson, the Vancouver Canucks goaltender who wears a rainbow flag in support of the LGBT community on the back of his mask/helmet.

“After all the attention this grabbed in the NHL, I thought, ‘Let’s see if anyone on the team starts treating me differently because I’ve got this thing.’” he recently told the Swedish website Aftonbladet. “But no one has said anything and if they did, so fucking what, they wouldn’t be people I’d like to hang out with off the ice. The only thing is that there aren’t many others who dare take this step and do something.”

Nilsson added these thoughts on gays in hockey:

“When people say there are three to four gay players on each (NHL) team, I say no, absolutely not. They quit when they were younger. There’s no one who would dare to or want to keep playing. Team sports are about the feeling of togetherness, it’s just as fun to go there to hang out and have someone to talk to as the actual sports, but if you have a hard time in the dressing room when you’re a teen it’s not as fun to play hockey on the field either.

“What happens is that we will lose gay players, who might otherwise have been the next Sidney Crosby or Connor McDavid or Wayne Gretzky. We lose talents. And some families with strong feelings about things might feel that, regardless if their son is straight or gay, he shouldn’t play hockey because they don’t want him in the harsh culture where coaches and players call each other all sorts of things. We lose our pride in hockey.”

And, finally, to boo or not to boo: Unfortunately for pro jocks, it comes with the territory. But, as former Bombers hoofer Troy Westwood tweets, “You know you have an awesome job when you are in a position to be booed by thousands of people.” Ol’ Lefty ought to know. He’s been there and heard that more than once.