Another Sunday smorgas-bored, and it’s mostly quick hits this morning because my attention span is like the golf season in Good Ol’ Hometown—short…

Okay, as far as I can determine, this is the National Hockey League road map to a reboot and the coronation of a 2020 Stanley Cup champion:

Summon the boys from hither and yon, put 24 teams in a “bubble” in a couple of “hub” cities, stick swabs up hundreds of noses every morning, noon and nighttime for three months, and play summer-stretched-into-winter shinny until either Alexander Ovechkin or Brett Hull is too drunk to stand during the post-playoff celebration.

Except I’m not on the beat.

There’s no sports editor instructing me to pack my bags and take enough clothes for a 90-day stay in one of those two “hub bubbles,” and it seems to me that news snoops are the forgotten, or ignored, element in the NHL’s quest to stem its financial blood-letting and, at the same time, determine a pandemic puck champion.

We know the rabble won’t be invited inside the “hub bubbles,” but what about sports scribes and natterbugs? Are they also persona non grata? Will those assigned to report on the goings-on in the “hub bubbles” be granted access to players, coaches, managers, etc.? If not (which is the most likely scenario), why bother going? If so, how many news snoops are willing to put their health, if not their lives, at risk?

I mean, people with medical diplomas on their office walls tell us that we can expect a surge of COVID-19 cases in the autumn, so do you really want to be in proximity to a bunch of guys who’ve been spitting and sweating on each other all day? That might be a tough sell on the home front.

A similar thought process would apply if the Canadian Football League sorts out its mess and establishes “hub bubbles” in two-to-four Prairie locales, for an abbreviated season that would commence in September and conclude in December.

I’ve long held that the toy departments of newspapers must discover fresh ways of doing business, given the immediacy of Internet news, the personal disclosures of athletes on social media forums, and the near-maniacal obsession of pro sports teams/organizations to control the message, so it could be that the COVID-19 pandemic will give sports editors no choice but to remake their sections in a significant way.

Same old, same old is done. Probably forever. Creativity must rule the day, and that will be a good thing. 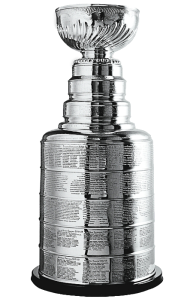 Let’s say you’re a news snoop on the Winnipeg Jets beat and you’re told to tag along with the team to a locale in the United States sometime late this summer/early autumn, when the NHL reboots. Maybe our Yankee Doodle neighbors will have a handle on the coronavirus by then. Maybe not. Maybe the streets of America will no longer be flooded with clashing rioters and storm-troopers after another rogue cop executes another Black man, seemingly for sport. Maybe they will be. So do you go?

Good work by a clever headline writer at the Drab Slab re the proposed Stanley Cup tournament cooked up by the mad scientists in NHL Commish Gary Bettman’s lab: “The Franken-playoffs.” It’ll certainly be different, if only because the lads will be playing in echo chambers dressed up as hockey rinks.

Whichever outfit wins the Stanley Cup, it’ll be the first time in history that no one from the winning outfit will shout, “We couldn’t have done this without our fans!”

My favorite tweet last week was delivered by Shannon Szabados, our longtime women’s national team goaltender: “Happy the NHL will be back, but without fans how do we expect players to know when to shoot the puck? How will opposing goalies know they suck?” That’s my kind of humor.

I’ve never subscribed to the “stick to sports” mantra as it relates to jock journos, because societal issues and sports have been intersecting since David took out his slingshot and coldcocked Goliath. Think heavyweight boxing champion Jack Johnson and his white wives. Think Branch Rickey, Jackie Robinson and whites-only baseball. Think Muhammad Ali and the Vietnam War. Think Tommie Smith and John Carlos at the Mexico Olympics. Think Colin Kaepernick on one knee. Think Billie Jean King being outed as a lesbian. Think racist team names, like Washington’s Redskins, and team logos, like Cleveland’s clownish Chief Wahoo. Think Johnny Manziel, Ray Rice, Bobby Hull and numerous other male athletes and domestic violence. So good on Paul Friesen of the Winnipeg Sun for straying beyond the accepted boundaries of sports scribbling to serve up a column on the current ugliness and nastiness south of the great Canada-U.S. divide. Paul had a natter with former Winnipeg Blue Bombers DB Jovon Johnson, many times a victim of racist acts and language, and he wonders why white people aren’t raising their voices against systemic racism while Minneapolis-St. Paul and other U.S. burgs burn and protesters are trampled by the hooves of cops’ horses. It’s a boffo read. 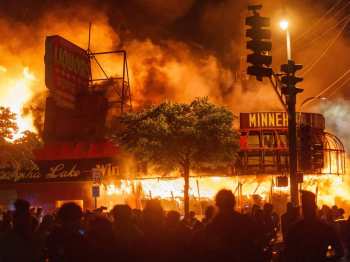 Curious tweet re U.S. rioting from Terry Jones of Postmedia E-Town: “No I wasn’t endorsing police firing rubber bullets at members of the media. I just can’t comprehend the racism that’s behind all of this. It got Trump elected. And isn’t this where I came in back in the 60s? Forget the cops. I’d bring in the fire department and turn on the hoses.” I’m not sure what to make of that, but, as a product of the 1950s and ’60s, I know I don’t like the optics.

There’s talk about a third fist fight between former heavyweight boxing champs Iron Mike Tyson and Evander (The Real Meal) Holyfield. Or, as Tyson likes to call it, “Leftovers.”

Hey, look who’s blah-blah-blahing about the CFL—Johnny Manziel. That’s right, TSN’s favorite lousy quarterback went on something called Golf’s Subpar podcast the other day, and he informed listeners that he “loved Canada,” even if the business side of Rouge Football is “a little bit ticky-tacky.” Well, if anyone knows “tacky,” it’s Johnny Rotten. The former Montreal Larks/Hamilton Tabbies QB also confirmed his fondness for females and nightclubs, and added, “I got a good heart, I’m a good dude. I treat people the right way for the most part. Deep down, I truly am a good person.” Ya, except for beating up and threatening to kill women, he’s a swell guy. 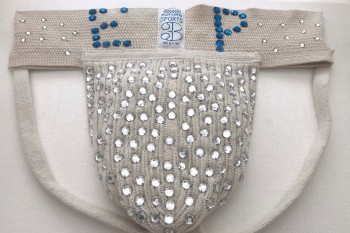 Speaking of complete dinks, if any of you girls out there are looking to get that special man in your life something unique, how about Elvis Presley’s old jockstrap? Straight goods. The very garment that once holstered the King’s jewels in the 1970s is up for auction by Paul Fraser Collectibles, and this is no ordinary jockstrap. It’s rhinestone-studded, “sexually potent” and, according to auction rep Daniel Wade, “the new owner won’t be able to resist wearing it out on a Saturday night—the Elvis magic will work wonders.” Oh, for sure, that’s what every woman is hoping to discover about her man on a first date—his underwear is half a century old.

Seriously, why was Elvis the Pelvis even wearing a jockstrap? Was there a chance his boys were going to pop out of his jumpsuit?

Oh, one final thing about Elvis’ jockstrap: It’s a size Medium, so maybe the King wasn’t really the king after all, if you catch my meaning. (Thank you, thank you very much.)

Coolest thing I’ve seen in a long, long time was John Fogerty celebrating his 75th birthday by singing Centrefield in centrefield at Dodger Stadium in Los Angeles. He was joined by his kids Shane, Kelsy and Tyler, with Fogerty playing a custom-made Louisville Slugger guitar. Centrefield is only the best baseball song. Ever. And how cool it must be to have a 75-year-old dad that cool.

I’m not big on all the retro stuff that we’ve been force-fed during the pandemic, but Taylor Allen has a good read on Laurie Boschman in the Drab Slab. Bosch was one of the genuinely good guys to ever wear Jets linen.

Also good to see is a new feature in the Winnipeg Sun, Ted’s Talk, which debuted on Saturday. Ted Wyman takes a wordy walkabout through the sports neighborhood, touching on a variety of issues, and I have to say it’s bloody well time. I don’t know how sassy, cheeky or irreverent Teddy Football plans to be with his new toy, but I hope he has fun with it. And takes no prisoners.

In late April, Postmedia slashed 80 jobs and shut down 15 papers. Last week, it was revealed that there’ll be another 40 “permanent” reductions across the chain. Again, I wonder if Postmedia will be printing two papers in Edmonton, Calgary and Vancouver by the time the COVID-19 pandemic has run its course. 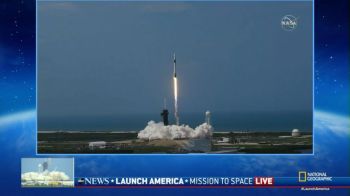 And, finally, a lot of us can use a little good news these days, and watching the SpaceX rocket leave the launch pad at Kennedy Space Center and roar off into the wild, blue yonder on Saturday was quite an emotional moment. There wasn’t a dry eye in my house. God speed to the two astronauts.