A Grey Cup game in December. In Canada. Maybe in Winnipeg. Perhaps in Edmonton. Possibly in Regina.

That’s the latest bit of zaniness to drift out of the Canadian Football League bunker in the Republic of Tranna, and it appears that Commish Randy Ambrosie and his three-downs overlords are actually serious about possibly taking the Rouge Football showcase event to one of their frost-bitten burgs. 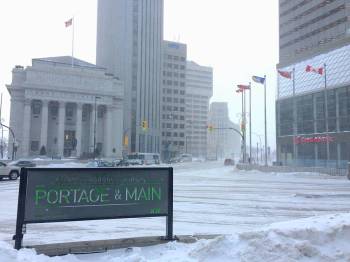 The way they have it figured, once there are only two teams still standing, the outfit with the superior record from a sawed-off season (eight, maybe nine, maybe 10 games) gets home field for the Grey Cup showdown, and that could mean the wind-ravaged, very frozen tundra of the Prairies.

But do we really need a Hypothermia Bowl?

Think of the poor sap who’d be first to kiss the Grey Grail. It’ll take the jaws of life to pry the guy’s lips from the metal mug. No amount of Botox would make him right again.

Maybe that’s why Commish Randy and pals have gone hat in hand to the feds for $150 million. They’ll need the loot for lawyers when surviving players file a class-action lawsuit seeking compensation for cruel and unusual punishment.

Look, we all know the mercury on The Baldies is apt to dip low enough to freeze the brass monkeys off Commish Randy once we arrive at December. So if—and that’s an if as large as an O-lineman’s appetite—there’s a 2020 CFL season that concludes during the Christmas shopping crunch, they’re setting themselves up for the ultimate football folly.

Let’s face it, there’s only one logical locale for any Grey Cup skirmish in the last month of the year—the comfy, climate-controlled confines of BC. Place Stadium in Vancouver, even if Rouge Football isn’t much more than a rumor on the Left Flank.

What matters is that there’ll be a roof to keep the large lads in pads dry and warm as they argue their case for three-downs bragging rights.

So Commish Randy and the overlords might want to rethink that host city thing before they find themselves gathered in a frost-bitten burg, wondering why they rolled the dice on a minus-30C day when post-game lattés on an outdoor patio was available.

If (there’s that word again) there’s a Grey Cup game in December, it won’t be a first. There have been four since the CFL was formed in 1958, the last on Dec. 3, 1972, and each of those skirmishes took place in Southern Ontario, which has never been mistaken for the Canadian Prairies.

The CFL isn’t planning a “shortened” season or an “abbreviated” season or a Coles Notes version of a season. It’ll be a “truncated” season, don’t you know. Oh, yes, news snoops have fallen in love with the word “truncated,” the way Jesus favored the word “blessed” and Brian Burke loves to talk about “truculence.” They can’t file a dispatch without informing us that any 2020 CFL crusade will be “truncated,” and I imagine copy from the Grey Cup game will go something like this: “The truncated season came to a close on the Flattest of Lands today with much truculence and more than 30,000 blessed empty seats. Only seven players were forced from the game due to hypothermia, with another six treated for severe frost bite. MVP quarterback Zach Collaros began the day with 10 fingers, but finished with eight. Lawsuits pending.”

This has nada to do with sports, but I thought I’d share it nevertheless. While walking home from a pub yesterday (for the first time in more than two months), I saw a man with tin foil on his head. True story. I did a triple take to confirm I was seeing what I thought I was seeing. Yup. Tin foil. On his head. He was loitering on the sidewalk, but I’m not sure if he was waiting for a bus or the Mother Ship. Either way, I wasn’t keen on approaching Tin Foil Man to inquire.

Things that make me go hmmm Vol. 1: A comedy club in Edmonton has been forced to shut down because belly laughs are a risky bit of business during the COVID-19 pandemic. Here’s how Alberta’s top doc, Dr. Deena Hinshaw, explained it: “If it’s a comedy club or some kind of performance where you’re going to have an entire room of people laughing or cheering at the same time, there is some increased risk to those activities.” Hmmm. “Some kind of performance” that has a room full of people yukking it up. Apparently the good doctor has seen Milan Lucic play.

Things that make me go hmmm Vol. 2: Sticking with the Wild Rose Country/comedy theme, Jason Kenney has decided that Winnipeg is neither a major city nor a National Hockey League locale. “Edmonton has the lowest level of COVID-19 infections of any major city in North America, certainly lower than any other NHL city,” the Alberta premier stated in making his pitch for E-Town as a hub burg once the NHL hits the reboot button. Well, okay, let’s do the math. Active cases as of Friday: Edmonton 58, Winnipeg 3. Hmmm. E-Town hasn’t outscored Good Ol’ Hometown that badly since the Oilers-Jets playoff series of the 1980s.

Speaking of the Jets, Patrik Laine did the Zoom thing with news snoops the other day, and among his many sound bites was a vow to never again grow his terrible beard. (“Once was enough.”) Puck Finn also suggested that his game will be “terrible” whenever the NHL is back in go mode, because he’s been away from the freeze for two months. I don’t know about you, but I’m more interested in Puck Finn’s one-timer than his scruffy chin whiskers.

Seriously, are Puck Finn’s chin whiskers, his Lamborghini, his golf game, and his video games newsworthy? I suppose they are during a pandemic, and it makes you wonder why more NHL players don’t spice up their sound bites with a sprinkling of personality.

There’s very little fresh messaging provided by Akim Aliu in the essay he has written for The Players’ Tribune. He tells us that hockey “isn’t” for everyone, a mantra some of us have been chanting for quite some time, so I’m guessing many among the rabble wish he would just shut his squawk box and disappear like summer wages. Except that isn’t how this works. As long as racism, sexism, homophobia, misogyny, bigotry, hazing, etc. exist in hockey, people like Aliu need to speak their truth, and it doesn’t matter that he was a fringe NHL player. Ugly is ugly, and hockey’s underbelly is ugly. Or did you miss the charming comments a group of young players made about women a couple of weeks ago? Again, there’s nothing new in Aliu’s message, but that doesn’t make it any less important. I just wonder how many people are paying attention.

A Bundesliga soccer match between Borussia Moenchengladbach and Bayer Leverkusen on Saturday featured 13,000 life-size, cardboard cutouts (of actual people) in the stands. The bad news: Cardboard fans are hell on beer sales. The good news: No long lineups to the washrooms.

Footy side FC Seoul has apologized for using female sex dolls as faux fans during a recent match. I agree. Putting dummies in the seats at sports events is a really bad idea. But enough about Drake.

Now that I’ve mentioned Drake, it’s worth noting that the National Women’s Hockey League expansion franchise in the Republic of Tranna is called the Six, a term coined by hip hop guys Jimmy Prime and Oliver North (El-Khatib) and popularized by Drizzy upon the release of his album Views From the 6. The question is: Will anyone in The ROT view the Six when Ponytail Puck returns?

Anyone who follows women’s hockey knows the game is a mess, with the NWHL and the Dream Gappers (Professional Women’s Hockey Players Association) offering very different road maps toward a sustainable operation that pays the workers a “living wage,” whatever that might be.

Commish Dani Rylan is convinced her NWHL can achieve that end without the NHL serving as a sugar daddy, whereas it’s NHL or bust for the Dream Gappers. Or is it?

Ice Garden: “Obviously the NHL is the endgame here but is that the only endgame you see or do you also see possibly a league with private investors, like large-scale private investors getting involved?”

Hefford: “We would never say it has to be the one and only way but there’s a number of things that we’ve communicated publicly that should be involved in a league.”

So either Hefford doesn’t know her own end game or, more likely, her pants are on fire.

Well, allow me to provide, once again, the Coles Notes version of the PWHPA agenda: The NWHL drowns in a sea of red ink; the NHL adopts the self-orphaned Dream Gappers and Ponytail Puck lives happily ever after.

The squawk boxes at Sportsnet continue to suck up to PWHPA membership/allies with ass-kissing commentary, the most recent example delivered by muppet head Colby Armstrong on Hockey Central at Home during a blah-blah-blah session with Canadian national team member Natalie Spooner.

“Thanks for joining us,” Colby began. “Great seeing you as always and…we see you a lot, like we really get to see you a lot, and especially through this we get to see you out there a lot advocating for women’s hockey. I have three little girls and you know they love you. They’re big fans. What’s it like being a role model?

“I’ve been able to watch you and see you deal with a lot of people and fans and little girls, and I think you have a great personality for it, so I think it’s worked out.

“You’re a very social person, like, fun to be around, high energy, probably the, you know, the person in the room or in the gym that keeps it bumping. You love singing, you love dancing…people follow Natalie Spooner on her, what do you have Instagram? I don’t have it. I tell my wife, we watch your stuff all the time. You found a way to entertain. Ya, very entertaining.”

I swear, after chewing on all that sugar, I hope Spooner booked a dental appointment.

Here’s a female athlete who doesn’t require faux hosannas or a sugar daddy—Naomi Osaka. According to Forbes, the Japanese-born, American-raised, two-time Grand Slam tennis champion earned more coin ($37.4 million) in a 12-month time frame than any woman in history. Yup, Naomi is in front of Serena Williams ($36 million) at the pay window, and you can probably bet the farm that they’ll be the only two women among the biggest money-makers in sports when Forbes releases its annual Top 100 list this week. Naomi slides in at No. 29 and Serena is at No. 33. If there are any other women in the group, my guess is you’ll find them on a tennis court.

And, finally, Eddie Haskell is dead. Long live Eddie Haskell (in reruns). For all you youngsters in the audience, be advised that Eddie Haskell, played by Ken Osmond, was one of the regular characters on the 1950s-60s feel-good sitcom Leave It To Beaver, and he was a smart-ass kid. Here’s how Paul Farhi of the Washington Post describes him: “Eddie Haskell was a sneaky little rat, a two-faced suck-up and a tinpot bully. A punk who stirred up trouble.” That’s spot on, although I might have added the word “smarmy,” because Eddie was the kid your parents didn’t want you hanging with at home or on the street. Ironically, bad boy Eddie grew up to be policeman Ken in real life.