Most people, I dare say, have not spent an afternoon or an evening in a press box, observing the little girls’ and boys’ games that big girls and boys play for great gobs of money or international acclaim.

So allow me to tell you a little something about the press box.

The press box, as I remember it, is generally occupied by gruff, hard-bitten, beer-swilling, middle-age wretches who failed miserably at sports and are now settling that score by writing nasty things about those who didn’t fail miserably at sports. And those are the female journalists. The men are unspeakable. 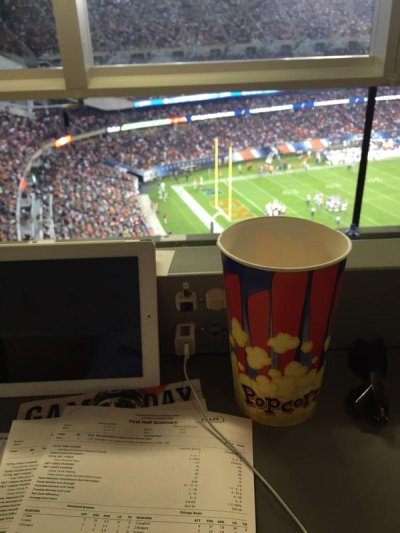 Again, as I recall, your basic male jock journo is white, middle-to-vintage in age, thinning on top, a confirmed heterosexual, unkempt, unfit (I’m being very kind when I say that), he’s dressed like he ought to be retired in Florida (with his pants hiked up to his arm pits), he’s usually seen filling his face with free popcorn or hot dogs (with the obligatory mustard drippings on his wrinkled golf shirt), and it’s not uncommon for him to be recovering from a hangover when he arrives at the rink or stadium for a night-time assignment.

There is nothing high brow about the male jock journo when observed in his natural habitat. As much as wry wit can be found in abundance in the press box, it is also a cesspool of irreverent, caustic, biting and ruthless humor. Adult humor. It would be rated R. You’d probably allow your 10-year-old daughter or son into a peep show before exposing her or him to three hours in a press box.

Seriously. If the scribes were to scribble what was said in the press box, they’d be sued, arrested or shot on sight. Yup, it’s that raunchy and raw.

Perhaps that’s changed. After all, I haven’t sat in a press box perch in almost 20 years.

I doubt it, though.

I mean, a football beat writer with the Philadelphia Inquirer, Jeff McLane, was ordered out of the press box during an Eagles game on Sunday because he was a loud-talker. Seriously, the guy got punted for being a loud-talker.

Now, I realize that the so-called City of Brotherly Love has a rep for being less than a warm-and-fuzzy locale. It was said long ago that the citizenry of Philly go to the airport just to boo bad landings. But come on. They kick a guy out of the press box for being a loud-talker? That’s like telling Santa he can’t go on his annual gift run because he’s fat and jolly. Santa is supposed to be fat and jolly. He has to be fat and jolly. And a male sports scribe has to be loud.

Well, okay, I suppose a case could be made that a male jock journo need not be loud. But trust me, he is. It’s in his press box DNA. So is being obnoxious.

I don’t pretend to know exactly what went down between McLane and the Eagles public relations staff on the Sabbath. I wasn’t there. But I’m quite certain that there was more at play than the Inquirer reporter being a loud-talker. There had to be.

Paul Wiecek of the Winnipeg Free Press has addressed the larger issue of professional sports teams attempting to control the message by eliminating the naysayers and those in the Fourth Estate who dare ask the difficult, uncomfortable and challenging questions, and I don’t think he’s far off the mark. Actually, he’s likely spot on.

The question I ask is this: Does anyone really care if the press box is full or empty?

Not likely. Among the rabble, there is little sympathy for the devil and, quite frankly, I’m not sure that the girls and boys on the beat should care if they’re sitting in the press box or not. I mean, is the free popcorn really that good? If it is and that means writing fluff, will the last jock journo to leave the press box please remember to turn out the lights?

What does a press pass for the Winnipeg Jets actually get a news scavenger these days? Access? I suppose that depends on your definition of access. To the Jets, access is making a player available to say “we just have to keep our feet moving and play the right way.” Then some PR flunky arrives to rescue him from the indignity of a post-game interrogation. To the jock journo, that isn’t access. It’s a waste of time.

The most interesting insight in Wiecek’s excellent piece was confirmation of something many of us already knew or suspected—the Puck Pontiff, Mark Chipman, is a control freak of the highest rank. The way the Freep sports columnist tells it, the Jets’ co-bankroll is known for his in-game temper tantrums and, for fear a scribe might alert the rabble the next time he holds his breath and stomps his little feet, the Puck Pontiff banished the print posse to the press box outback. They’re now in a different area code and time zone than His Hockey Holiness’s bunker. Ballsy move by Wiecek, especially given that the Drab Slab is the official newspaper of the Jets. Whatever access he already didn’t have, he’ll have even less. Not that he should care.

John Ferguson didn’t worry about crap like that back in the day. His atomic explosions as Jets general manager are as legendary as his fists during his playing days as one of the toughest hombres in National Hockey League history. At worst, he would wince if we wrote about him dumping a bucket of ice on the Buffalo Sabres’ bench or kicking/punching holes in the walls of his bunker on press row, but he usually greeted us with an embarrassed wink and a grin.