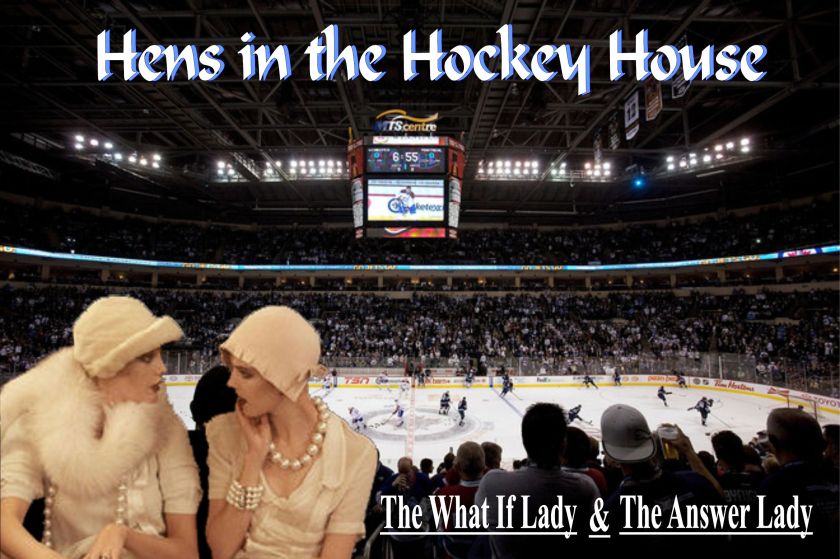 It’s a Triple H day because we have two Hens in the Hockey House—The What If Lady and The Answer Lady.

Naturally, our favorite go-to girls have their pulse on all that matters in Jets Nation, including the uber significant issue of shorter beer lines and more potties at the Little Hockey House on the Prairie. Oh, yes, if there’s a point of discussion involving your Winnipeg Jets, the two ladies are—pardon the bad pun—flush with information about the National Hockey League outfit.

What If Lady: There are reports that Ondrej Pavelec showed up at training camp with a new body. What if his new body is as bad as his old body?

What If Lady: What if the Jets traded Pavelec to the Toronto Maple Leafs for James Reimer, even up?

What If Lady: I really liked what I saw of that Nikolaj Ehlers kid at the rookie tournament in Penticton. He’s so fast. So skilled. He’s the Great Dane! What if he plays that well in the main camp?

Answer Lady: There’s only one thing preventing Ehlers from starting this season with the Jets—food. I mean, the kid’s a twig. Fear not, though. He’s a keeper. Not this year, but most likely next October after a year of mom’s home cooking has kicked in.

What If Lady: It sounds like Teemu Selanne really wanted to play another season. He said in his biography that he even considered signing with the Jets a year ago. What if Teemu had played for the Jets last season?

Answer Lady: He’d be Poh’d at Claude Noel and Paul Maurice instead of Bruce Boudreau, because they would have given all Teemu’s minutes to Chris Thorburn.

What If Lady: ESPN The Magazine ranks the Jets No. 97 out of the 122 major pro sports franchises in North America for fan experience. I think that really sucks. I doubt it if anyone from ESPN has ever been to a game in Winnipeg? What if someone from ESPN actually attended a game at the MTS Centre? Would our ranking go up?

Answer Lady: No, it would plummet to the bottom because the battery in the poor guy’s rental car would freeze during the game and he’d he’d get mugged by one of our charming citizen’s of no-fixed address while waiting for a tow truck.

What If Lady: Mark Scheifele and Jacob Trouba had really good rookie seasons. I don’t believe in a so-called Sophomore Jinx, but what if one or both of them regresses?

Answer Lady: I have spoken with my personal analytics department and the propeller heads assure me that there are Corsi reasons and Fenwick reasons why this will never happen. After crunching numbers, they say the % of probability is approximately = to the ratio of TOI divided by ESG + a certain % of salary cap against the balance of $ owed. It’s all Greek to me, but I believe the probability of both Scheifele and Trouba going into the tank is remote, but the possibility of one hitting the skids is high.

What If Lady: A lot of NHL teams created an analytics department or hired fancy-stats people this past summer. I didn’t hear anything about it from the Jets, though. What if they’ve missed the boat in this growing and increasingly important area of the business?

Answer Lady: I’m told Craig Heisinger is analyzing the analytics and Zinger will present his analysis of analytics to general manager Kevin Cheveldayoff as soon as he wakes up from his summer nap.

What If Lady: There’s been so much talk about the young players at camp this year. Guys like Nic Petan, Josh Morrissey, Nik Ehlers and Adam Lowry would give the Jets a whole new look if they make the big club. But what if youth isn’t served?

Answer Lady: Youth shall be served. His name is Adam Lowry. He’s a Western Conference forward—big and skilled. Get used to seeing him. You’ll like him.

What If Lady: Five teams from the Central Division made the playoffs last season—Chicago, St. Louis, Colorado, Dallas and Minnesota. I can’t see the Jets overhauling any of those clubs, so it looks like another non-playoff year in River City. What if they’re out of contention by the trade deadline?

What If Lady: Evander Kane sure seems to get in a lot of hot water over saying and doing the silliest, little things and he always seems to be the subject of trade rumors because of it. I have a personal theory that he does it just to provoke the media. So what if the media wise up to his shenanigans and stop writing and talking about the goofy stuff? What if they write and talk about his on-ice efforts only?

Answer Lady: Environment Canada will issue an emergency weather warning—hell has frozen over.

What If Lady: Evander has been bragging about scoring 50 goals in a season. I’m a big Kane fan, so I think that would be brilliant. But what if he only scores 19 again?

What If Lady: True North spent $6 million this summer for renovations to the MTS Centre, and that included a whack of new toilets. I hear they’re boffo biffies, but what a waste (pardon the bad pun). What if they had spent that money on another player or two instead?

Answer Lady: You want to talk about spending money on crap? Try $19.5 million on crappy goaltending. Try $3.6 million on a crappy fourth-line forward who belongs in the AHL. What’s another $6 million for a bunch of biffies when you’ve already tossed more than $20 million down the crapper on two players?

What If Lady: That’s kind of harsh. True but harsh.

Answer Lady: Okay, our work is done here for today. Let’s go check out those new toilets on the 300 Level. I’ve got some beer to get rid of.

What If Lady: Me too. Those shorter beer queues are simply marvy.

We now interrupt our regularly scheduled cheekiness to bring you this important weather alert: Hell hath frozen over.

That’s right, kids, at least one local news scavenger has discovered what some of us have known for quite some time—Evander Kane likes to yank the media’s chain.

Gary (La La) Lawless, who oft serves up heaping helpings of Kane-imosity, recently offered a fresh take on the Winnipeg Jets polorizing left winger, and he has decided to play nice. For now.

“Kane spends the working portion of his life in Winnipeg,” girthsome Gary writes in his Winnipeg Free Press column. “When he’s here, he visits hospitals and donates time and money to helping others less fortunate than he. What else do we want from him? A signed affidavit he likes it here? Enough already.

“Early on, Kane’s act caught some of us off guard and rubbed the wrong way at times. Over time, it’s become apparent that Kane is comfortable in the spotlight and not afraid to stir the pot with his well-followed Twitter and Instagram accounts.

“The kid is cheeky. Give me his looks, youth, talent and money and the resulting sideshow would make Evander look like a wallflower.

“Some of us, this writer included, need to offer up a bit of a mea culpa.

“Kane is no villain, even if he sometimes likes to play one. And if you think he doesn’t know what he’s up to and isn’t aware of the reaction he’s about to produce, you haven’t been paying close attention. Kane is smart and calculating.”

Patti Dawn Swansson has been writing about Winnipeg sports for more than 40 years, longer than any living being. Do not, however, assume that to mean she harbors a wealth of sports knowledge or that she’s a jock journalist of award-winning loft. It simply means she is old, comfortable at a keyboard (although arthritic fingers sometimes make typing a bit of a chore) and she doesn’t know when to quit.
She is most proud of her Q Award, presented to her in 2012 for her scribblings about the LGBT community in Victoria, B.C.