Once we get past the handwringing, the gnashing of the teeth and the anger/bitterness of journos across the land in the aftermath this week’s Postmedia print purge, what are readers of newspapers left with? This: Winnipeg is the sole two-paper town west of the Republic of Tranna.

Oh, sure, Postmedia continues to print both a broadsheet and a tabloid in Vancouver (Sun and Province), Edmonton (Sun and Journal) and Calgary (Sun and Herald), but this is a classic case of a one being dressed up as a two. If the deep-thinkers in one newsroom determine what is to occupy the space between the display ads of both dailies in those three bergs, it is one newspaper, no matter how it is packaged. 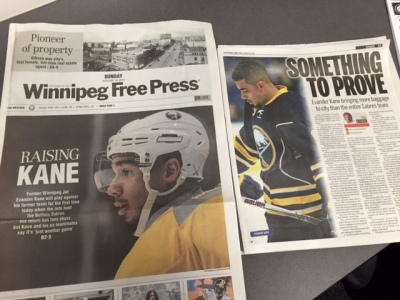 Think of this as beer. If you pour half a bottle of Molson Canadian into a mug and the other half into a tall, thin glass, you’re still drinking the same beer. Tastes the same, just looks different.

So it shall be in Vancouver, Edmonton and Calgary. Rather than two competing journalists chasing the same story and, hopefully, delivering different slants, you now shall have one reporter with no urgency to get the scoop and no fear of being beaten by the opposition. There is no opposition. No alternative voice.

Which makes Pegtown a unique market in the western flank of the nation.

The puppeteers at Postmedia pull the strings for the Winnipeg Sun, while FP Canadian Newspapers Limited Partnership bows to its own master in publishing the Winnipeg Free Press. Unlike others in the Postmedia collective, the two Pegtown sheets are not Siamese twins, joined at the head. They are in competition, which serves the greater need, even though the end result each day might not always satiate the appetite of readers.

What I am left to wonder is how much Winnipeg will remain in the Sun.

Although not included in this week’s carnage, which involved the merging of newsrooms at eight dailies (the Ottawa Sun and Citizen being the others) and the kicking to the curb of 90 journalists, the after shocks were felt in River City.

Ted Wyman remains sports editor at the Sun. Sort of. He keeps the job title, but some invisible head sitting behind some invisible desk in some remote outpost of the land now will decide what Winnipeg sports fans want to read. How this serves Pegtown provides serious pause for ponder. I mean, shouldn’t a sports editor be able to reach out and feel the pulse of the people? It’s easy enough to recognize that the Winnipeg Jets and Winnipeg Blue Bombers are the big dogs in town and, thus, generate the most talk. But what of lesser players such as the Manitoba Moose, the Winnipeg Goldeyes, the University of Manitoba Bisons, junior hockey, local tennis, golf, curling, figure skating, etc.?

My concern is that they shall be lost in the shuffle.

Take curling as an e.g. It is the third biggest beat at the two River City dailies, behind only the Jets and Bombers. But will there be a Winnipeg Sun presence at next month’s Scotties Tournament of Hearts in Grande Prairie, Alta.? Not likely. Thus, no local angle, even though there shall be two Toba teams in the event. The Brier, meanwhile, is in Ottawa. Will we be reading Manitoba-centric dispatches from Paul Friesen, Ken Wiebe or the aforementioned Wyman, or generic puff from a Bytown scribe?

I fear the worst, and all this because Postmedia bit off more than it could chew when it purchased Sun Media’s English-language properties last spring.

As mentioned, Wyman is not out of work. He becomes part of the Sun’s bare-bones stable of scribes, replacing Kirk Penton, an elite reporter who has been anointed the Postmedia chain’s national writer for all things Canadian Football League. Coverage of the Bombers shouldn’t suffer in terms of quantity, but quality will take a hit because Penton is the best in the business.

After scribbling a piece about George (Shakey) Johnson the other day, it occurred to me that most folks don’t know the story behind the deposed Calgary Herald sports columnist’s nickname. We don’t call him Shakey because he’s a nervous Nellie with constant jitters. It’s due to his golf game. Back in the 1970s, you see, a few of us from the Winnipeg Tribune sports department would gather for a round of golf on occasion. The cast would rotate, but it generally involved Caveman Dutton, Greaser Drinnan, Swampdog Rauw, Davey Boy Komosky, Shakey and myself. Shakey played a neat-and-tidy game of golf. He struck the ball straight and true, although not far, and we actually witnessed a hole-in-one from him one day at Tuxedo. But he could not sink a putt inside three feet to save his life. He had the yips on the green. After one astonishing display of unparalleled hopelessness with the blade, we retreated to the pub, whereby Caveman Dutton and I commenced to calling him Shakey. The name stuck.

Big night for my longtime friend and colleague Dave Komosky, who joins the Manitoba Sportswriters & Sportscasters Media Roll of Honour at their 60th annual awards dinner at the Delta Hotel. As I scribbled a few weeks ago, it’s a long overdue honor. I only wish I could be there to hear his acceptance speech. I have a feeling Davey Boy is going to put some people on the BBQ.