Tuesday morning coming down in 3, 2, 1…and, in honor of its 35th birthday, I was going to list 35 things I like best about TSN, but I stalled when I couldn’t decide between Kaylyn Kyle’s hair and Jeff O’Dog’s butt cleavage and his food fight with Tradey…

Once upon a time, those of us who live in the colonies derisively referred to TSN as the Tranna Sports Network because, you know, it was like that old zen koan: If a tree falls outside the Republic of Tranna and there’s no TSN camera crew on site to record it, does the tree actually fall?

But, hey, just look at TSN today. No longer Tranna-centric.

Except, of course, for the daily Drake updates during the NBA season, the daily updates on Auston Matthews’ grooming habits, the daily Where’s Mitch Watch (which is the offspring of last year’s daily Where’s Willy Boy Watch), the daily Mike Babcock speaks-but-says-nothing feature, the daily Vlad the Gifted still isn’t speaking English report, the annual Day Of The Long Faces when they breathlessly and bitterly recount the night Wayne Gretzky used the blade of his hockey stick to part the hair on Doug Gilmour’s chinny-chin-chin, and the annual retro look at the Joe Carter dinger.

So, ya, TNS remains on Tranna overload, but at least they now have a camera handy if a tree falls in the colonies. And they even let Sara Orlesky or Farhan Lalji talk about it.

Okay, just kidding. I like TSN. A lot. It’s terrific, flaws and all.

I would rather, for example, listen to their natterbugs on all matters Planet Puckhead as opposed to the squawk boxes on Sportsnet, even if it means staring at O’Dog’s butt crack while he’s brawling over a bagel with Tradey.

I’d like to say the same about the Grid Guys, but they lost me last year when they morphed into teenage groupies with their cringeworthy, Beatlemania-like fawning over their favorite lousy quarterback, Johnny Manziel. By the end of the season, I believe Rod Black and Johnny Rotten were actually dating, although I haven’t been able to confirm it. The Transcona Kid (that’s Blackie) is still gushing over Johnny Train Wreck, so there’ll be more therapy sessions and, hopefully, Dr. Phil can have him detoxed by the time the Canadian Football League playoffs commence.

In the meantime, they’re celebrating 35 years on air, and I’d like to salute TSN with my personal Top 10 Reasons Why I Watch(ed):

10. Jim Van Horne, who let it be known in a recent tweet that he represented ground zero for TSN talking heads. “I was the first commentator hired by TSN. We hit the air 35 years ago today (Sept. 1). First media conference I went to with my TSN blazer was met with ‘what the fuck is TSN?’ I think the question has been answered. I had 17 yrs of fun there. Congrats to those who carry the banner proudly.” I recall golfing with Jim Van Mustache and the late Billy Powers in a charity tournament during the early 1980s, when all three of us worked in Calgary. I swear, at one point Jim was rolling on the ground, literally, in a fit of laughter. It was the funniest 4½ hours of my life.

9. Matt Dunigan. I sometimes wonder if Matty has tossed back a brown pop or two by the time the red light is switched on, but I get a kick out of the “let’s get ‘er done” former quarterback who often forgets that he’s in a TV studio or broadcast booth, not a locker room. 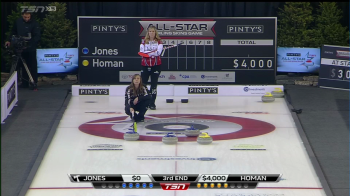 8. Skins. No, I’m not referring to the amount of flesh TSN’s bevy of cover girl teleprompter readers are told to flash. I’m talking curling. The made-for-TV Skins game was introduced in 1986 and it’s been must-see TV for us Pebble People ever since.

7. The women’s World Cup soccer panel of Kaylyn Kyle, Clare Rustad and Diana Matheson. Imagine that. Allowing women to do more than read a teleprompter. They were actually allowed to provide opinion. Strong opinion. So strong, in fact, that apologists for the Yankee Doodle Damsels were squealing in protest. What an overdue concept.

6. Kaylyn Kyle’s hair. Rapunzel ain’t got nothing on our soccer girl. Kaylyn’s mane is longer than a Winnipeg winter. And much prettier, which is okay to say because Kaylyn and her gal pals discussed makeup and girl crushes during the World Cup, so I don’t want to hear from the PC Police.

5. Jeff O’Neill, aka Jeff O’Dog. What can I say, the guy makes me laugh out loud, plumber’s cleavage and all.

4. The CBC did a dirty when it kicked Chris Cuthbert to the curb, but TSN was there to scoop him up, for which all Rouge Football fans should be grateful.

3. The CFL. I’m not sure Rouge Football as we know it would exist today if not for TSN.

2. Vic, Moosie, Russ, Linda and Cheryl. Show me your top game broadcast crew, any sport, and I’ll one-up you with TSN curling’s Vic Rauter, Moosie Turnbull and Linda Moore, followed by the current team of Vic, Hurry Hard Howard and Cheryl Bernard. Moosie’s left us, but he was one of my all-time favorite people, and it’s no coincidence that he called Winnipeg home.

1. James Duthie. As the Pepsi ad said (with the help of Tina Turner), “Simply the best. Better than all the rest.”

(FOOTNOTE: Many thousands of years from now, when archaeologists dig and sift through the ruins of our civilization, they will discover numerous subterranean hideaways full of sports memorabilia, nacho leavings, discarded pizza boxes, empty beer cans, flatscreen TVs the size of a Royal Family dinner table, and scientific proof of intense male bonding between members of the long-lost Jockosaurus species, who thrived in their secluded habitat without female companionship. After carbon dating, they will determine that—YES!—TSN and history’s first Man Cave arrived at the same time, on the same day, Sept. 1, 1984.)