Monday morning coming down in 3, 2, 1…and if you don’t like reading about soccer, you’d be wise to move to another blog right about now…

The women’s World Cup is comfortably underway in France, and I sometimes wonder why we in North America have been so slow on the uptake in embracing the beautiful game known around the globe as football but soccer here at home.

True, fitba can be slow, tedious and boring. And, of course, there are the play-actors and their near-death experiences, a dodgy bit of business that is shame-worthy but never Oscar-worthy.

Perhaps it’s the theatrics of the soccer elite—almost exclusive to the men’s side of the pitch—that keeps us at arm’s length. I mean, watching Neymar and other faux thespians flopping and twitching and gasping for their last breath, like so many trout out of water, provides comic relief but it’s also a total turnoff. If I want to see bad acting, I can turn on Mama’s Family any night on MeTV.

But, hey, even with fake injury time added to each half of a soccer match, it’s over in less than two hours.

Cripes, man, the halftime show at the Super Bowl lasts longer than that, especially if Janet Jackson has to put her clothes back on. And yet the National Football League and its Super Bowl is a colossus, even when halftime entertainers aren’t flashing flesh.

Many myopic mainstream jock journalists are reluctant, or refuse, to acknowledge MLS as a major-league sport.

Steve Simmons in the Republic of Tranna, for example, recently posted this item to his Twitter feed:

Toronto FC’s 2017 MLS title fails to register on the Steve-O-Meter.

Atlanta United, in fact, has a better average head count (52,000-plus) than every team in Major League Baseball. Toronto FC outdraws the Blue Jays. Seattle Sounders outdraw the Mariners. Cripes, man, as of June 2, Portland Thorns FC of the National Women’s Soccer League had better attendance than nine MLB outfits. See for yourself: 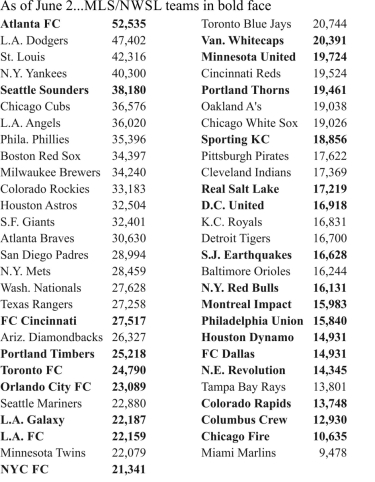 I see a lot of “big league” head counts in there.

Meanwhile, here are a few other points of interest about MLS:

* Forbes valued four franchises at more than $300 million last year (Atlanta United $330M, L.A. Galaxy $320M; Seattle Sounders $310M; LAFC $305M) and Toronto FC at $290M. Again, that spells “big league” to me.
* In 2018, 53 MLS players collected $1,000,000 or more at the pay window, while both Zoltan Stieber of DC United and Andreu Fontas of Sporting Kansas City came in at one dollar less. If those aren’t “big league” wages, Pele was a punk rocker.
* Among all global leagues, only Poland’s First Division has had a faster growth spurt in the past five years, and MLS average attendance between 2013 and 2018 was eighth in the world.

* Atlanta United puts more people in the pews than Manchester United, Newcastle United, Liverpool, Benfica and Atletico Madrid, among many others, while Seattle Sounders have a larger per-game following than outfits like Chelsea and AC Milan.

Is MLS the premier fitba operation on the planet? Of course not. But it doesn’t have to be on par with the English Premier League, Serie A Italy, La Liga or the Bundesliga to make it a member in good standing of the Big Five—and not the Fifth Beatle—in North America.

No surprise, really, that Simmons would pooh-pooh the MLS as a hamlet-sized dot on our sports landscape. Here’s what he had to say about fitba on the Toronto Mike’d podcast during Toronto FC’s championship run: “I’m almost embarrassed to be at the soccer games, because my knowledge of the game and my interest in the game is so limited. I don’t know the ABCs. Honestly, I couldn’t tell you all the positions. I don’t know how many players are on the field. Honestly, I have no connection to this game at all. I didn’t grow up with it, I didn’t play it, I never watched it, I didn’t care about it.” That’s an astonishing confession from a sports columnist with a nation-wide platform. Let’s hope it means he’ll leave the writing on the women’s World Cup to scribes who actually know how many players are on the pitch.

If you tune in to World Cup coverage on TSN, you’ll see something as rare as a Monday morning without a Donald Trump tweet—an all-female natterbug panel. Instead of simply looking all gussied up and pretty, they’re letting Clare Rustad, Kaylyn Kyle and Diana Matheson analyze teams, break down plays and—oh…my…gawd—deliver opinion. You know, like they actually know what they’re talking about. Imagine that. Women with functioning brains on sports TV. What a concept.

I really enjoyed the lively and spirited banter between Rustad, Kyle and Matheson at halftime of the England-Scotland skirmish. Kyle and Rustad disagreed sharply on what should and shouldn’t be a hand ball penalty, and host Kate Beirness knew enough to zip her lips and let the two former Canadian national team members have at it. Kyle was, to say the least, animated and agitated after the Video Assistant Referee awarded England a penalty kick due to an unintentional hand ball by the Scots. Kyle was emphatic: The game referee and VAR room should ignore one of the most fundamental rules of the game and let the women play on. Which, of course, is total nonsense. Do you know what we’d have if officials stopped calling games by the rule book? The Stanley Cup playoffs.

Fashion note: The aforementioned Kyle has the most magnificent head of hair on TV. I know several drag queens who would give their first-born to have that mane.

Speaking of hair, what are the chances that Brett Hull is looking for some hair of the dog this morning? If Hull wasn’t five sheets to the wind on Sunday night in St. Loo, he was off his meds because he looked and sounded totally wasted prior to puck drop for Game 6 of the Stanley Cup final between the St. Loo Blues and Boston Bruins. I’m guessing his head is exploding right about now.

Someone hurled a can of beer onto the ice surface late in the Game 6 skirmish. I’d point to Hull as the most likely suspect, except he didn’t appear to be in the mood to let a good can of beer go to waste.

I never thought I’d see dominance in sports like Secretariat at the 1973 Belmont Stakes. Big Red romped to horse racing’s Triple Crown with a 31-length victory in a world-record time that stands unchallenged to this day, and watching film of that gallop still gives me a shiver and has me reaching for the Kleenex.

Even after the passage of so much time, it seems so unreal. Like a fairytale about a wonder horse that us old folks like to tell our grandkids. But it happened, and so did a different kind of thoroughbred—Rafael Nadal. If anything comes close to Secretariat at the Belmont, it’s Rafa on the red clay of Roland Garros in Paris. In winning his 12th French Open title and 18th tennis Grand Slam on Sunday, Rafa is running neck-and-neck with Big Red on my personal scorecard of belief-challenging accomplishments. He’s 93-2 in France. That is not a typo. Do not adjust your screen. The King of Clay has lost twice—in 15 years! Against the absolute best players on the planet. That’s insane.

And, finally, it’s my understanding that they’ll be playing a rather significant basketball game tonight in the Republic of Tranna. Like the majority of Canadians, I won’t be watching, but I hope Kawhi Leonard and the Jurassics get the job done against the Golden State Juggernaut. I love it whenever we beat the Americans at our own game.