I’m so old I remember Tim Horton before he became a pot of coffee and a box of Timbits.

When I heard there was big news about the Toronto Maple Leafs and a statue, my first thought was that perhaps they’d traded Dion Phaneuf.

My second thought? I sure hope he isn’t coming to Winnipeg to join the Jets.

Silly me. We all know that Jets general manager Kevin the Possum doesn’t make trades, so no worries about adding another pigeon perch to the Jets blueline corps.

As it turns out, the deep thinkers in the Leafs’ ivory tower (now there’s a contradiction in terms) plan to honor the giants of a National Hockey League franchise that long ago lost its luster. The idea is to plop a Legends Row statue outside the Air Canada Centre in the Big Smoke, and we know for certain that former Leafs’ captain Teeder Kennedy will be among the players honored. The others remain shrouded in secrecy.

I mean, they’re dealing with a 30-foot slab of granite in the form of a players bench. It would take at least 10 players to fill it. A dozen at the most. How in the name of Humpty Harold Ballard are they going to come up with that many Leafs legends? They tell us Teeder and two others will be unveiled in early September. So they’re stuck at three.

That’s going to be a short bench. Sort of what current head coach Randy Carlyle has to deal with.

Cracking wise aside, there are many legends in the Leafs’ closet. Honest. There are. It’s just that all of them played before the invention of color TV. So the difficulty isn’t in compiling a list of Leafs legends—it’s finding enough hockey people in Toronto who can reflect that far back to make informed choices.

No doubt some of those guys will find a spot on the bench. It would be fitting if Eddie Shack made the final cut, because the bench is usually where Punch Imlach planted him.

At any rate, by the time sculptor Erik Blome puts down his hammer and chisel, there’ll be a bench full of legends for the Leafs’ legions to gawk at and pigeons to poop on whenever they’re in the vicinity of 40 Bay St. in Tranna.

I should point out that there are reports (unconfirmed) that the Leafs don’t want their younger generations of fans to feel left out, so they plan to erect a statue near the old Maple Leaf Gardens to symbolize what the franchise has been all about since the last Stanley Cup parade in 1967.

Here are some candidates: 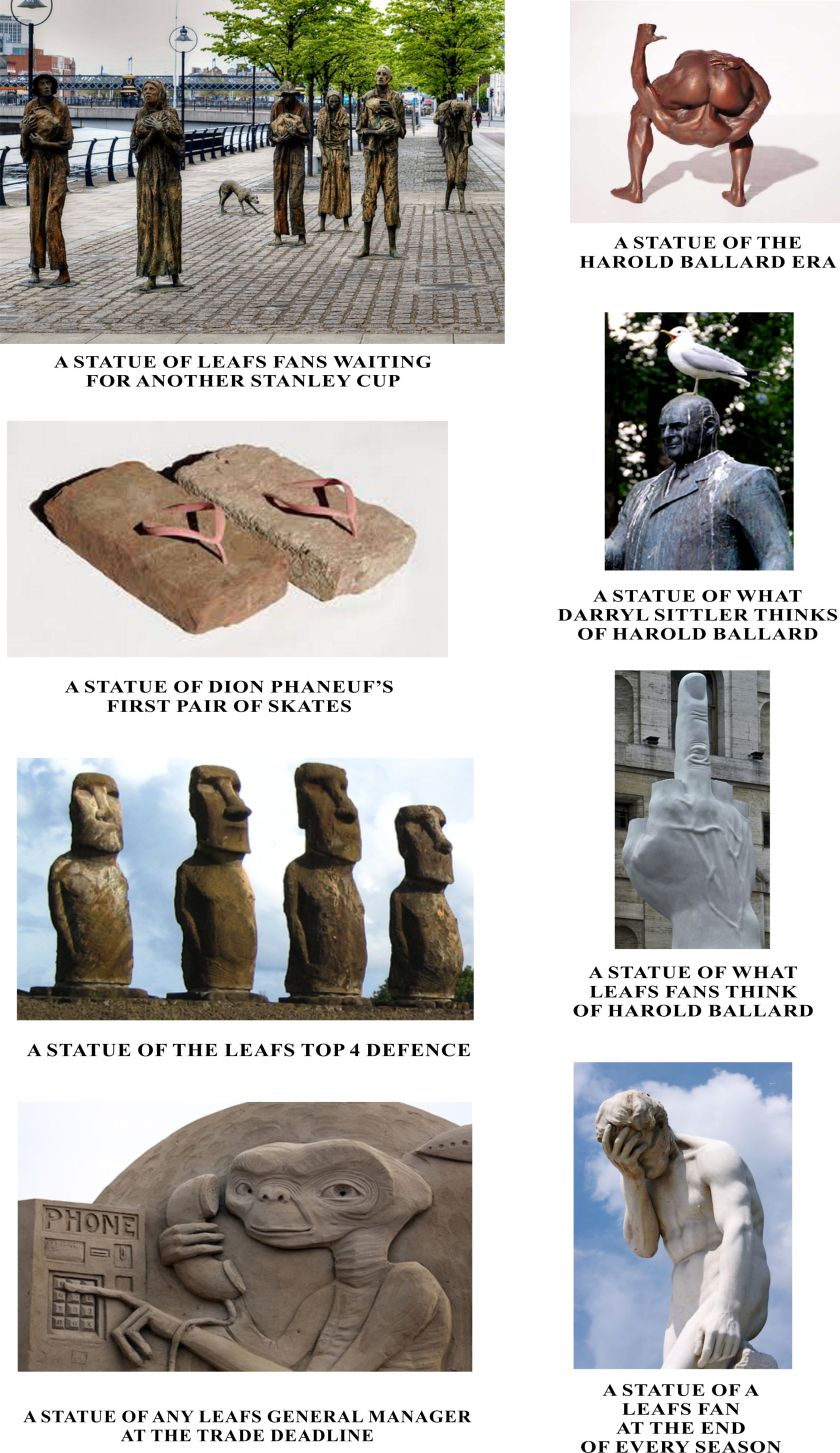