I am Canadian. Let me count the ways on our 150th birthday…

I walked before I could skate, but only by about a day or two.

I believe that Lanny McDonald’s mustache is one of the seven wonders of the world.

Our pet was Juliette.

I still know the sweater numbers for all the Montreal Canadiens and Toronto Maple Leafs from the 1960s.

I’m convinced that our real national anthem is the theme music for Hockey Night in Canada, not O Canada.

I feel embarrassed every time Justin Bieber does something stupid.

I cheer every time Perry Mason kicks Hamilton Burger’s butt in court, because Raymond Burr is one of us.

I know that former Prime Minister Lester Pearson’s middle name was Bowles and that people also called him Mike.

I know the Neil Young tune Long May You Run is about his hearse, Mort.

I wore two pair of socks and plastic bags over my feet so they wouldn’t freeze solid while skating on the outdoor rinks in Winnipeg.

I know what playing spongey is.

If you tell me you have a new pair of garbos, you’re good to go for a game of spongey. 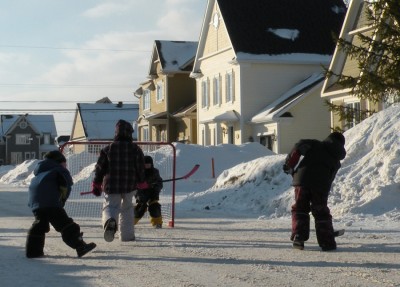 The plaintive cry of “Car!” can only mean one thing—road hockey.

I know a road apple is something you don’t eat.

I know the difference between prairie oysters (bull’s balls) and Prairie Oyster, a terrific country band that doesn’t appear to be making music anymore.

I can’t parlez vous fluently in both of our official languages, but I can converse enough well en francais to order a beer and some poutine in Quebec.

I don’t really believe Toronto is the Centre of the Universe.

Yeehaw! I know the Greatest Outdoor Show on Earth is all about horses, doggies, cowboys, cowgirls and Wrangler jeans, and everybody in Calgary dresses in character during the Stampede.

I know people who are being white-hatted in Cowtown are putting a Smithbilt on their heads, not a Stetson.

I remember corn brooms and the poetic sound they made on a sheet of pebbled ice.

I can tell you that the Trail Smoke Eaters were a world champion hockey team from beautiful British Columbia, not a bunch of cowboys choking on trail dust.

I still get teary-eyed when I hear Foster Hewitt cry out “Henderson has scored for Canada!”

I remember when Americans would come to Canada to play in the Canadian Football League and stay for the rest of their lives (hello, Kenny Ploen and Jackie Parker).

I know Ol’ Spaghetti Legs and Twinkle Toes were CFL players, not contestants on Dancing with the Stars.

To me a flower isn’t something you grow in the garden…Flower wore No. 10 for les Canadiens.

I like my temperature in Fahrenheit and my distances in feet, yards and miles.

I always wish hockey players would put their teeth in before a TV interview.

To me, winter headwear is a toque, not a knitted cap.

I know Butch Goring’s hockey helmet was a SPAPS.

When I see someone with a watermelon on her or his head, I know their favorite football team is the Saskatchewan Roughriders.

I know who Youppi, Gainer the Gopher, Buzz and Boomer, Ralph the Dog, Harvey the Hound and Crazy George are.