Another Sunday smorgas-bored…and apparently there have been sightings of Donald S. Cherry in my neck of the woods…

When I heard that Paul Maurice had been talking about statues the other day, I assumed it was a reference to Patrik Laine and his stone hands.

Turns out Maurice meant a pigeon perch outside the Little Hockey House On The Prairie, in the likeness of Rink Rat Scheifele.

“I have a higher opinion of Mark Scheifele than he has,” Coach Potty Mouth told news snoops who had assembled to collect bon mots from their daily to-and-fro with the Winnipeg Jets bench puppeteer. “I think he has the (potential) to be a one-team player that wins Cups and is the captain of it at some point and gets a bronze statue in front of the building kind of guy. I do. I do. In order to do that, you got to play 20 years, you got to win Stanley Cups, eventually you have to captain the team…there’s some (Steve) Yzerman there.”

My goodness. That’s a tall can of whoop-de-do.

I mean, I like Scheifele. Been a big fan ever since he arrived in River City as a scrawny kid with Bambi legs. But a statue? Coach Potty Mouth might want to do a nip and tuck on the hosannas.

Seriously. Ben Hatskin, the man who started the pro hockey business in Good Ol’ Hometown, doesn’t have a statue—bronze, chiseled in stone, or built of popsicle sticks. Nor do B. Hull, Ulf, Anders, the Shoe, Ducky or Teemu.

Pegtown really isn’t a bronze statue kind of burg as it relates to saluting our sporting giants. 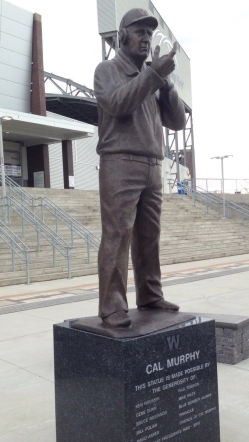 Oh, sure, the Winnipeg Blue Bombers have genuflected in the direction of Bud Grant and Cal Murphy with pigeon perches over at Football Follies Field In Fort Garry, and I’d like to think that one day legendary quarterback and salt-of-the-earth citizen Ken Ploen will join the former Grey Cup champion coaches. Maybe Chris Walby, too.

For the most part, though, River City is more into murals, buildings, parks and streets.

But we have just two statues, neither of which honors an athlete.

I’ve long held that Hatskin, more than anyone, deserves a pigeon perch, and it shouldn’t be necessary for me to go into the blah, blah, blah and yadda, yadda, yadda of his bona fides. Suffice to say, Coach Potty Mouth wouldn’t be in River City to talk about Rink Rat Scheifele and bronze statues if not for Benny and his Jets in 1972.

What would it take to get Benny in bronze outside the Little Hockey House On The Prairie? A willingness on the part of some movers and shakers (hello, Mark Chipman) and money.

Do that first, then we can discuss taking a couple hundred pounds of clay and molding it into a likeness of Scheifele 20 years from now.

What would we call a statue of Scheifele? The Bronze Bambi, of course. (If you saw the Rink Rat in his first few years, you’ll understand.)

Another game, another donut for Laine, and this is what the always-blunt Brian Burke had to say about Puck Finn on Hockey Night in Canada: “This is not a slump now. This is a horrible Grand Canyon of failure.” Ouch.

Speaking of Burke, it should be obvious to one and all that the former NHL executive and GM is HNIC’s curmudgeon-in-waiting. Once Donald S. Cherry’s gasbag hits empty, Burkie will slide into the main pulpit and receive seven minutes of spew time instead of his current 4 1/2. An ugly wardrobe will be optional.

Well, it’s six days since the Canadian Football League livestock auction began and what does Kyle Walters have to show for it? Look, ma, no hands! Talk all you like about Willie Jefferson, but the Winnipeg Blue Bombers general manager has yet to convince someone with a pair of sure hands to come to River City and play catch with quarterback Matt Nichols. Let’s not sugar coat this. It’s a massive fail. There’s no other way to look at it. Sure, Walters has ample time to find someone willing to play in Pegtown, but the best of the free agent batch are otherwise occupied and it’s now a matter of his bird dogs poking their beaks under rocks hither and yon. I’d like to say I’ve got confidence in Walters and his scouts to flesh out a high-end pass-catcher, but I don’t.

Deluxe receiver Derel Walker would have looked boffo in blue-and-gold, but he chose double blue and the Republic of Tranna over River City. Go figure. What does The ROT have that Good Ol’ Hometown doesn’t? Oh, that’s right, 15,000 empty seats.

If Walker catches 100 footballs in 2019 but no one is at BMO Field in The ROT to see it, does it really happen?

Another receiver who won’t be doing his thing in Pegtown is Duron Carter, now the problem child of the B.C. Lions. “I am looking forward to making a fresh start on the West Coast,” he told news snoops. By my count, Carter has had six “fresh” starts in seven years: Two in Montreal and one each in Indianapolis, Saskatchewan, the Republic of Tranna and now Lotus Land. His ass-clown act lasts about as long as food on Chris Walby’s dinner plate. Carter’s hands are never the problem, of course. It’s his yap. Can’t see that changing, even if Lotus Land is the natural habitat of more flakes per capita than anywhere else in the country.

Got a kick out of Marcel Desjardins’ comment when his quarterback, Trevor Harris, bolted the Bytown RedBlacks and skedaddled to Saudi Alberta and the Edmonton Eskimos. “When we signed Dominique (Davis) to his contract, which was the end of January, we had a pretty good sense as to how things were going to play out with Trevor,” the RedBlacks GM said. “And we were more than comfortable allowing him the chance to compete to be our starting quarterback.” Ya, Desjardins was so comfortable with Davis that he went out and recruited Jonathon Jennings in a panic signing the next day.

So, blackballed QB Colin Kaepernick has settled his collusion claim against the National Football League, which means the NFL’s dirty laundry will remain tucked away in a closet. Meanwhile, it’s reported that Kaepernick will receive $60 million, or more, in compensation. Imagine that. Paying someone $60 million to shut the hell up and go away. You think that would work with Don Cherry?

Okay, it’s agreed. Matt Kuchar is Scrooge McGolfer for initially chintzing out on an appropriate payment to his caddie, David Ortiz, after winning the Mayakoba Golf Classic and $1.3 million in November.

Ortiz expected a payout of $50,000, with which he planned to purchase a laundromat in Mexico. Instead, Kuchar rewarded his bag mule with a paltry $5,000.

Talk about taking a guy to the cleaners.

Kuchar, who had always come across as a goody two-shoes kind of guy, has been flogged fore and aft by news snoops and the rabble on social media, and it doesn’t seem to matter that he eventually made things right by Ortiz, forking over the $50,000. His payment and mea culpa were a day late and a dollar short. But here’s what I find myself wondering: Who are news snoops to tell Matt Kuchar how to spend his money?

“An under-reported aspect of the professional athletic life is the extreme cheapness of many competitors,” Cathal Kelly informs us in the Globe and Mail. “After all, it’s not really any of our business.”

Yet he made it his business with a 900-words essay.

For the record, it’s my experience that news snoops are some of the chintziest creatures roaming terra firma, even when on an expense account. They are kings of the freebe. So their sanctimonious scribblings are nothing more than a pot meeting a kettle. 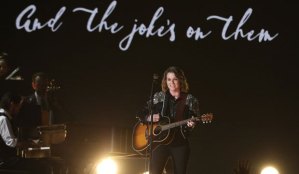 And, finally, it’s about singer and lesbian of note Brandi Carlile at the Grammy Awards: She had something important to say and sing about and, as one of the “misfits” she referenced, I was deeply moved. It was gobsmackingly brilliant. Beautiful. Just beautiful.