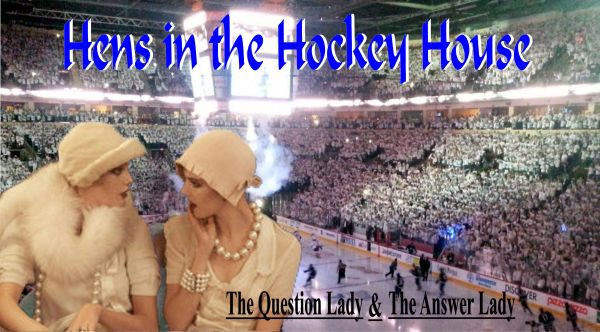 The Winnipeg Jets open their 2018-19 National Hockey League crusade tonight against the Blues in St. Louis, and they have a tough act to follow. After advancing to the Western Conference final last spring, it has to be Stanley Cup final or bust for the locals.

Do they have it in them to take that next step? The Two Hens in the Hockey House have the answer. Take it away, ladies…

Question Lady: Well, the quest is about to begin and I haven’t been this jacked up about anything since Paul McCartney stepped back on stage for a rousing encore the other night at the local hockey palace. How about you?

Answer Lady: You went to see Sir Paul in concert?

Question Lady: You bet your Beatles bubble gum cards I did. He’s been my main man since the lads first appeared on The Ed Sullivan Show. The guy’s a rock ‘n’ roll legend and can still get after it at 76 years of age. You don’t like Macca?

Answer Lady: Meh. His best post-Beatles work was Band On the Run. That was released in 1973. He’s been in a slump ever since. You know, kind of like the Jets since the World Hockey Association days.

Question Lady: Will you old farts ever let go of that Jets/WHA nonsense?

Answer Lady: Nonsense? You call it nonsense? Wash your mouth out with granny’s lye soap, girlfriend! Those were the glory days—three championships, five trips to the final in seven seasons, kicked the Russian Bear’s butt, best forward line in all of hockey…neither version of the NHL Jets has accomplished anything to compare. It’ll be 40 years next spring since the last victory parade rolled down Portage Avenue, and we haven’t had a whiff of glory since.

Question Lady: Which brings us to the current edition of the Jets. Plenty of buzz about these boys. They’re among the morning-line favorites to win le Coupe Stanley. Do you think the hype is warranted?

Answer Lady: Absolutely. All the ingredients seem to be in place. I believe they’ll romp through the regular season, maybe even win the President’s Trophy, and then, hopefully, they’ll borrow on the experience gained and lessons learned from last spring and get the job done next April, May and June.

Question Lady: Any chance of the Jets doing a face plant like the Edmonton McDavids performed last season?

Answer Lady: Sir Paul will be back in town with Ringo, John and George in tow before that happens, and since two of the Fab Four are pushing up daisies it ain’t gonna happen. There’s too much depth, too much talent. There aren’t any Looch’s in the Jets’ lineup to drag everybody else down. There’s no one like that anchor Milan Lucic in E-Town.

Question Lady: So this season will be a cake walk?

Answer Lady: Not at all. It’s not like the other outfits on this side of the continent have been twiddling their thumbs. The St. Louis Blues ought to be better. Ditto the Dallas Stars. San Jose Sharks upped their game with Erik Karlsson. The Nashville Predators are still nasty. But, ya, the Jets are the best of the bunch.

Answer Lady: Yup. Down the middle. Maybe. Rink Rat Scheifele is a legit No. 1 centre, but it’s iffy after that. I’ve long been a Bryan Little fan and I believe he’ll suitably fill the second slot. But what if his best-before date has already passed? Is Jack Roslovic a ready-for-prime-time centre? We don’t know. We can only guess. It could be a repeat of last season when general manager Kevin Cheveldayoff felt obliged to seek help from beyond. We might be looking at another Paul Stastny scenario.

Question Lady: What you’re saying is that this Jets team isn’t as good as the one that reached the Western Conference final last May?

Answer Lady: Do the math. Stastny gave the Jets 13 points in 19 regular-season games and, more significant, 15 points in the Stanley Cup tournament. Can either Little or Roslovic deliver that kind of production? From October through March? Sure. April-May-June I’m not convinced. And remember, it isn’t about the regular season for the Jets anymore. It’s about what goes down in the tournament. The playoffs, that’s their measuring stick. Everything else is window dressing.

Question Lady: Any other misgivings?

Answer Lady: Twig Ehlers. The guy’s dynamic, but he’s a 35/40-goal scorer dressed up as a 25/29-goal scorer. His retreats into the twilight zone are mysterious and frustrating. Maybe it’s that whole PlayStation thing. Maybe the Vancouver Canucks are on to something by banning PlayStation and Fortnite on road trips.

Question Lady: Are you serious? You think Ehlers’ trips to la la land are linked to an obsession with video games? That’s crazy talk, girlfriend. Patrik Laine is one of those PlayStation goomers and he scored 44 goals last season.

Answer Lady: I’m just spitballing, girlfriend. If Puck Finn scores 44 goals every winter they’ll let him play Fortnite until his thumbs fall off. But there must be a reason why Twig vamooses for chunks of time. I mean, four goals after March? Zero in 15 playoff games? And people thought Howard Hughes disappeared. Maybe that’s what I should call Ehlers instead of Twig—Howard.

Question Lady: You’re being kind of hard on the kid, don’t you think?

Answer Lady: All I’m saying is he has 35-goal talent (or more) and his Invisible Man routine is beginning to wear thin. On the plus side, he’s young and can learn about the mental side of the game from a guy like captain Blake Wheeler.

Question Lady: Speaking of Wheeler, do you see another 91-point crusade out of him?

Answer Lady: I don’t see why not. Playing with Rink Rat Scheifele and Kyle Connor, he ought to get a point a game by accident. The guy’s a stud.

Answer Lady: Yup. Puck Finn will win the Rocket Richard Trophy with 57 goals. The Rink Rat will reach the 100-point plateau and finish second to Connor McDavid in scoring. Connor Hellebuyck will win the Vezina Trophy. Paul Maurice will be a finalist for coach of the year.

Question Lady: What about the playoffs?

Answer Lady: Can’t say. Too much can change by then, and I expect it will. Chevy will do something at, or just before, the trade deadline. It’ll involve centres and defencemen.

Question Lady: Okay, gotta go. I’d say let’s do lunch, but I’m going home for a soak and to listen to the latest McCartney album. How about you?

I’ve often wondered how, and why, Bob Irving has kept trucking along.

I mean, the man we know affectionately as Knuckles has been the Winnipeg Blue Bombers’ main storyteller since 1974. It’s easy to do the math. That’s 43 years ago. Numbers, however, don’t provide perspective on his time describing the goings-on of the Canadian Football League outfit.

For perspective, try this: The year Knuckles began blah, blah, blahing about the Bombers on CJOB…

So, ya, Knuckles has been around some. Squints use carbon dating to determine his age. But that doesn’t mean he’s passed his best-before date. His voice is still as smooth as Tennessee whiskey, his delivery as descriptive as a Steinbeck novel, his integrity unassailable.

That will be absent from the ‘OB broadcast on Friday night in Vancouver, when the Bombers pay a visit to B.C. Place for a skirmish with the Lions. Knuckles has retreated to the repair shop to permit medics to tinker with his ticker and, while there’s little doubt the capable Kelly Moore will perform admirably in his stead, Knuckles is one of those guys you fill in for but cannot replace.

If there is a Vin Scully of the CFL, it’s Knuckles Irving, who’s actually a nicer guy than he is a play-by-play broadcaster.

The sports media, on both the print and electronic side, can be an open range for galloping egos and a misguided sense of significance, but it is largely the province of genuinely good, honest women and men who recognize they’re working in the toy department and, thus, acknowledge that they’ve got a great gig.

I don’t think Knuckles has ever lost sight of that. He’s a humble, earthy man with a killer wit that often keeps the sidelines at Bombers practices at full guffaw. He takes his job seriously but not himself. His passion for his work, the Bombers and the CFL is unparalleled, and I suppose that’s what keeps him trucking after all these years.

No telling how long Knuckles will continue to blah, blah, blah about the Bombers, but his career is kind of like his forehead—it never seems to end.

And that’s a beautiful thing.

Patti Dawn Swansson has been scribbling mostly about Winnipeg sports for 47 years, which means she’s old and probably should think about getting a life.