Another Sunday morning smorgas-bored…and, no, I didn’t watch the Jets-Flames skirmish Saturday night, because that’s past my bedtime…

Online subscribers to the Drab Slab (guilty, yer honor) receive morning briefings from sports editor Steve Lyons, who advises us what we should be reading and what he’s been reading.

It can also be revealing, which was the case on Friday when Lyons recounted a telephone tete-a-tete with the junior man in his stable of scribes, Taylor Allen. The bossman directed young Taylor’s attention southwest to Carman, where the best senior golfers in Manitoba had been swinging the sticks. His mission: “Spin a yarn” on champions Rhonda Orr and Bruce North.

“I love doing these golf stories,” responded Taylor, “but I was just wondering, does anyone care about them?”

Well, this is going to come across as one of those cranky-old-fool-shakes-fist-and-shouts-at-clouds posts, but back in the day we never would have asked such a question, and I don’t say that to pooh-pooh young Taylor. He’s excused his naivité. After all, what would he know of back in the day? 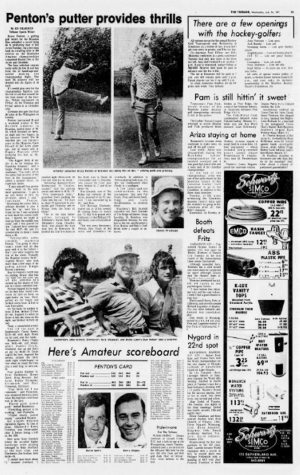 So let me shake my tiny fist and tell you what it was like.

We covered golf (shakes fist). Lordy, did we cover golf. We covered it like it was equal parts papal election and JFK assassination. We wouldn’t merely do a folo on the Manitoba Seniors Championships two days after the last putt had dropped (shakes fist again). We’d drive down Hwy. 3 and not stop until we were at the Carman Golf & Curling Club for the first round. We’d also be there when the trinkets were distributed and the winners had retired to the 19th hole (stops shaking fist long enough to take a swallow of beer).

We’d do it because there’d be hell to pay if we ignored local golf. People cared. A lot (shakes fist).

Usually it was Steady Eddie Dearden on the beat for us at the Winnipeg Tribune, and either Bags Bagley or Knobby Beck for the Winnipeg Free Press, but all of us on staff were dispatched to the links for a variety of tournaments, and it wasn’t uncommon to find our copy on the sports front the next day.

I think we even covered something called the Toymakers Tournament (shakes fist, shakes head), but memory sometimes betrays me. The Toymakers might have been a curling thing.

Whatever the case, it wasn’t just golf that received the royal treatment. It was all local sports.

To jog my grey matter, I called up the final two editions of the Trib the other day, and here’s the local content in the sports section: 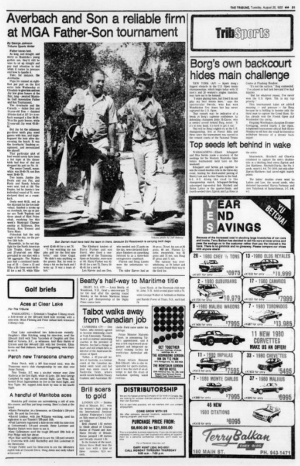 I should point out that those two editions included dispatches out of Saskatoon from the talented and delightful Lester (Ronny) Lazaruk, on assignment at the Canadian Senior Men’s Fastball Championships. Yes, we actually sent Ronny to Toontown to tell readers all about our Winnipeg Colonels and their ace hurler, a long, tall drink of water named Pallister, Brian Pallister. Name probably sounds familiar. As for Ronny, he liked it so much that he’s still there.

Anyway, readers were conditioned to opening either paper to find coverage of local sports of all stripes. We tossed a blanket over the community (shakes fist). We got to know the movers and shakers at the grassroots level, not just at the top of the food chain, and they often would thank us for coming out to their event. Imagine that.

Today, the Winnipeg Sun functions on the whims and dictates of the faceless, unknowing taskmasters at Postmedia, which is most unfortunate. If it ain’t named Jets, Bombers, Goldeyes or FC, they ain’t interested. The Drab Slab does a much, much better job, but coverage is still scant in comparison to back in the day. Today, for example, other than the Jets there isn’t a single local sports story in a five-page section. Not good.

I suppose there’s hope, though. I mean, young Taylor Allen told Freep bossman Steve Lyons that he enjoys covering local golf, and I say that warrants a fist bump rather than a fist shake.

It’s incredible, really, that Bruce North is still atop the leaderboard in Manitoba golf, albeit in a different age category. I recall editing Steady Eddie Dearden’s copy about Bruce winning this tournament or that tournament as a sprig in the 1970s, so good on Bruce. 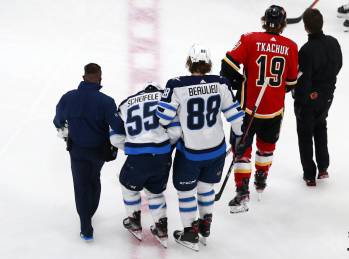 I don’t know about you, but I’ve viewed numerous replays of the Rink Rat Scheifele-Matthew Tkachuk incident on Saturday night—from various angles and at different speeds—and I failed to see anything sinister. No question that Tkachuk’s right skate clipped the back of Scheifele’s left leg, but nothing I saw suggested it was a deliberate kick with intent to cripple. Meaning Winnipeg Jets head coach Paul Maurice is off his nut or, most likely, he’s playing mind games when he accuses the Calgary Flames forward of a deliberate “filthy, dirty kick.” Tkachuk, to be sure, is among the National Hockey League’s high-ranking irritants and the Jets will be required to rein him in if they’re to survive their best-of-five Stanley Cup qualifying skirmish, but I don’t believe there’s any Russian blood in him. The Russkies kicked. Good American boys don’t.

I had the Jets pegged to take out the Flames pronto. I actually thought they’d get out the brooms. Now, after Saturday’s 4-1 loss, I can’t see them winning three of the next four if the Rink Rat’s wonky left limb puts him in the infirmary for the duration. I know, I know. Winnipeg HC overcame other inconveniences during the crusade that was paused in March due to COVID-19, but losing your No. 1 centre is more than a speed bump.

There was much talk about the lengthy absence of David Pastrnak from Boston Bruins’ training camp, but he returned to the NHL club last week. Apparently they found him in Elliotte Friedman’s beard.

Friedman’s epic chin whiskers are so thick and unruly that O.J. plans to make them his next stop in the search for the real killers.

You know you’re on Planet Puckhead when the Twitterverse is abuzz about Friedman’s foliage and also explodes into a loud howl over which man is the bigger cad, Don Cherry or Ron MacLean. Both Grapes and Sideshow Ron were trending mid-week, and I’d call it a debate over who does and doesn’t belong on Hockey Night in Canada, except much of it was your typically toxic Twitter trolling. In other words, name-calling. Let me sum up the rabble’s to-and-fro in one sentence: Cherry is a zenophobic bigot and one woman wants to punch MacLean in the face. For the record, I’m fully against bigotry and the punching of faces, but I’m not an anti-beardite.

Donald Trump’s boy Eric tweeted his thanks to NHL players for standing during the playing of the Star-Spangled Banner when they returned to the ice last week, but Hockey Diversity Alliance co-founder Akim Aliu was having none of it. “Yo, real talk Eric Trump, you’re the last guy the NHL and the hockey world want support from. It’s not real patriotism if you’re using it to divide us,” he responded on Twitter. Hmmm. Once upon a time, not so long ago, it was news when an athlete or coach took a knee during the national anthem. Now it’s news when they stand. 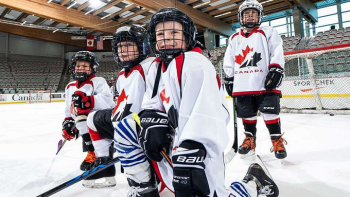 Based on numerous Twitter comments, Americans actually believe it’s near impossible to take a knee while attired in full hockey kit. Are they really that dense? Little kids do it, for gawd’s sake.

I was in a local watering hole Saturday afternoon and the grand total of two people, one wearing an Edmonton Oilers jersey and both clutching Oilers face masks, came in specifically to watch their E-Town hockey heroes play the Chicago Blackhawks. They both departed after the Chitowners took a 3-1 lead. Meanwhile, there was considerable bustle (but no TV) on the patio. So much for the notion that people will go inside, and stay, to watch shinny on a warm, sunny weekend afternoon during the drowsiness of August.

If anyone has a clue what’s going on in the Canadian Football League these days, please dial 1-800-4-A-ROUGE immediately and ask for Commish Randy Ambrosie. He’d like to know, too.

I’m still not sold on Winnipeg serving as a hub bubble for a potential three-down season, because it would mean an invasion of Yankee Doodle Footballers numbering in the hundreds. Seriously. They want to welcome all those large lads from COVID Country? I’m hard pressed to think of a worst-case scenario, except maybe hiring Harvey Weinstein to do odd jobs in a sorority house.

If the Miami Marlins lose another player to a positive COVID-19 test, is there any truth to the rumor that Dr. Anthony Fauci automatically moves into the starting rotation?

If enough top players take a pass on the U.S. Open tennis tournament, will Serena Williams win by default and will it count in her career Grand Slam total? That might be the only way the former neighborhood bully can still beat the top women.

I always say if there’s something you do better than all others, do it. So Megan Rapinoe, who’s been flapping her gums ever since the Yankee Doodle Damsels lapped the field at the 2019 women’s World Cup of soccer in France, now has a talk show to call her own on HBO—Seeing America with Megan Rapinoe. If Megan sees the same America as a lot of us looking in from the outside, she should really have something to talk about in November.

And, finally, couldn’t resist posting this pic of Sarah McLellan, hockey scribe for the StarTribune in Minneapolis. That’s Sarah in Edmonton after completing her required quarantine before covering the Minnesota Wild-Vancouver Canucks playoff joust. Take special notice of Alberta Premier Jason Kenney’s vast mountain vista in the background. It’s truly spectacular. Oh, wait. There are no mountains in E-Town. They only exist in Kenney’s propaganda machine.

3 thoughts on “Let’s talk about shaking fists and yelling at clouds…Flames get a leg up on Jets and Rink Rat Scheifele…Elliotte Friedman’s chinny, chin, chin…Eric Trump, NHL ally…the Diversity Alliance has no diversity…and other things on my mind”