A Thanksgiving Day smorgas-bored coming down in 3, 2, 1…and I live alone, so I find myself wondering if I should order a turkey pizza today, if there is such a thing… 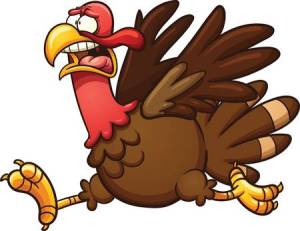 We all know there are turkeys in sports.

You know what I’m talking about. Take the Winnipeg Jets skirmish v. Sid and his Pittsburgh pals on Sunday night at the Little Hockey House On The Prairie as an e.g. Total gobbler. With none of the trimmings, unless you consider a 7-2 loss by the home side something special.

So let’s talk turkey today. And, at the same time, give thanks, because we all have something to be grateful for. Such as:

Thanks to the Winnipeg Blue Bombers and Jets. Ya, I know, they both sometimes suck, but without our football and hockey heroes we’d only have Brian Pallister’s road trips to Costa Rica and snow storms to talk about.

Gobble, Gobble: Why doesn’t Stacey Nattrass sing a portion of O Canada en francais at Jets games? Manitoba has a significant Francophone population, so shouldn’t Stacey be instructed to warble the National Anthem in both our official languages? 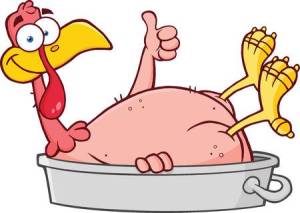 Thanks to a two-newspaper town. The rest of Western Canada doesn’t have it as good as River City, where the Winnipeg Sun and the Drab Slab knock heads on a daily basis. I know, I know, I sometimes bash the boys on the beat, especially the fiction writers at the Drab Slab, but it’s tough love.

Gobble, Gobble: Don Cherry should be thankful that no one at Rogers has noticed how truly gawdawful he’s become with his rambling, mumbo-jumbo mutterings on Saturday nights. Rogers punted a boatload of natterbugs in the summer, but Grapes somehow escaped their attention. Does he have pictures?

Thanks to English teachers who are required to reprogram their grammar students every Monday morning and assure them that a) Cherry-speak is not our third official language; b) “EVERYTHINK” and “SOMETHINK” aren’t actual words; c) not every sentence must end with AN EXCLAMATION MARK! Yes, bless the teachers.

Gobble, Gobble: I’m still waiting for someone at Sportsnet to explain why it bills itself as “Canada’s #1 Sports Network” yet it ignores the Canadian Football League. That’s kind of like the Pope saying he’s the planet’s No. 1 Catholic, but he’d just as soon not talk about that Jesus dude and his hangers-on.

Thanks to TSN for delivering the CFL to us, even if the boys in the booth don’t always know when to shut up and the boys on the panel are more concerned about wardrobe than wideouts.

Thanks to Saskatchewan for being next door, because the Flattest of Lands gives us Manitobans one more reason to feel good about ourselves. Not that we need another reason.

Gobble, Gobble: I don’t care how many fights Milan Lucic has already been in, or how many knuckles he plans to bruise this season, Looch doesn’t belong in today’s National Hockey League.

Thanks to those melon-headed Green People on the Flattest of Lands for traveling hither and yon in support of their Roughriders. It doesn’t matter that there’s not much else for them to do. Let’s just say there’s no better fan base in Canadian jockdom, and leave it at that.

Gobble, Gobble: The Calgary Flames flipped the calendar back to the 1970s and recruited Looch just to fight, and that’s just wrong.

Thanks to the marketing whiz who dreamed up the “eggs for lunch” commercial featuring the nerdy guy whose girlfriend looks exactly like his mom. It cracks me up every time I see it. (See what I did there? Cracks me up…it’s an egg commercial. Get it?)

Gobble, Gobble: Jock journos in the Republic of Tranna. It’s about that whole Drake thing. Really? You can’t let it go?

Thanks to the Republic of Tranna for being there. In these oft-difficult times, we need all the comic relief we can get.

Gobble, Gobble: Boycotting female hockey players who insist they “deserve” a living wage have totally lost the plot. They say they’re trying to build a better tomorrow for Ponytail Puck with their Dream Gap Tour, but in reality their main goal is to put the National Women’s Hockey League out of business. I fail to see how glorified scrimmages (it’s dreadful hockey) and photo-ops with Billie Jean King is advancing the cause.

Thanks to our two ‘B’ girls, Bianca Andreescu and Brooke Henderson. So young, so talented, so engaging. How much fun are we going to have watching them for the next dozen years?

Gobble, Gobble: People who insist that Dustin Byfuglien owes the Jets and their fans a snap decision on his future really get up my nose. It’s his life. It’s his timetable. Let it be.

Thanks to Ron MacLean and Tara Slone, the polished, poised and professional hosts of Hometown Hockey on Sunday nights. Ya, sure, it sometimes gets gushy and syrupy, but a healthy dose of warm-and-fuzzies once a week is good for the soul.

Gobble, Gobble: Seriously. Do I have to watch that dopey commercial about the dopey guy who forgets his pregnant wife in the car one more time? In real life, the mother-in-law would have roasted the dude’s marshmallows by now.

Thanks to our curlers. Whenever the Bombers or Jets have flatlined, we’ve always been able to count on our Pebble People to make things right. They’re already doing it again this season, and I don’t care what anyone in Wild Rose Country thinks or says. Nobody does curling better than ‘Tobans.

Gobble, Gobble: I liked baseball a lot better when there wasn’t a champagne shower after every game.

Thanks to Patrik Laine for being real. I’m not sure the Jets appreciate Puck Finn’s blunt honesty, but I know news snoops do.

And, finally, happy Thanksgiving Day to all and, hopefully, too much turkey for dinner won’t make you any sleepier than this blog post did.