Monday morning coming down in 3, 2, 1…and don’t think for a minute that I’ve given much thought to any of this…

It was mid-June 1979 and John Bowie Ferguson had just examined the list of players available to him in the National Hockey League expansion draft.

He winced. Then scowled.

Fergy rose to his feet and trudged across the main room of his 13th-floor suite in the fabulous Queen Elizabeth Hotel. He stopped in front of a large window, stared at the splendor that is Montreal, and noted that Mary Queen of the World Cathedral was directly across the street.

“Well,” I said, “I guess you have two choices, Fergy: You can go across the street and do some serious praying, or you can jump.”

The Winnipeg Jets general manager did neither. He just grunted.

Head coach Tom McVie, sitting in a nearby chair, smiled and cracked wise: “You know,” he said, “there’s enough talent available for us to win the Allan Cup. It might be seven games, but if we get home ice in the seventh game, we could win.”

He was joking, but not far from accurate.

I don’t know what $650 million will buy the Seattle Whatsits two years hence when the new kids on the block piece together their expansion roster of rejects, but I do know what $6 million bought Fergy and the Jets in mid-June 1979—sweet petite.

The NHL’s existing 17 outfits, be advised, did not lean toward benevolence when they grudgingly agreed to accept les Jets, the Edmonton Oilers, Quebec Nordiques and Hartford Whalers into their shinny cartel. The plan was to first plunder the rosters of the World Hockey Association survivors—Winnipeg HC suffered the worst body count—then allow them to go on a dumpster dive for dregs.

Some interesting names were there for the choosing. Like Bobby Orr. Except the great No. 4 was crippled and retired. The Big M, Frank Mahovlich, was available, except he was 41 and, like Orr, finished. Fergy could have had former Jets head coach Larry Hillman, except Morley was 42 and hadn’t played in three years. Yvan Cournoyer? The Roadrunner was out of gas. I seem to recall there also being a dead guy on the list.

It was so bad that Fergy didn’t even bother to call out names on his final shout on draft day.

“Okay,” he muttered in a tone that suggested both protest and resignation, like a kid being force-fed one more mouthful of Brussels sprouts before dessert, “Winnipeg Jets take the last two players.” 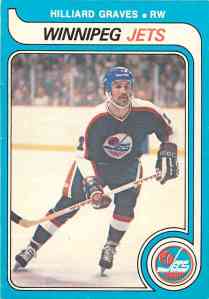 Still, combined with holdovers from the Jets 1979 WHA championship roster, that bunch easily could have won senior hockey’s Allan Cup, but they failed to qualify for the Stanley Cup playoffs. They won 20 of 80 games, and just nine in their sophomore season.

We know the NHL has no plan to be similarly punitive with Seattle, because a $650 million sticker price demands that they get some sizzle with their steak. For the Jets, though, it was $6 million worth of beans and wieners.

The plundering of rosters and a player pool of ragged retreads weren’t the only indiginities inflicted upon the Jets and their WHA brethren. In a penalizing departure from established practice, the NHL ruled that the four expansion teams would choose last, rather than first, in the amateur draft. By the time Fergy used the No. 19 shout-out to pluck Jimmy Mann (talk about cruel and unusual punishment), guys like Ray Bourque, Rob Ramage, Mike Gartner, Craig Hartsburg, Paul Reinhart and Mike Foligno had already been snatched up. Ahead of the draft, Fergy had said, “Let’s face it, Ray Charles could pick the first-round drafts. We all know who they’re going to be.” So let’s all blame Ray Charles for Jimmy Mann.

Being bad had its benefits for Fergy and les Jets. Their names were Dave Babych and Dale Hawerchuk, plucked in the 1980 and ’81 entry drafts, respectively. With Babs and Ducky on board, les Jets soared from a nine-wins, 32-points season to 33 Ws and 80 points.

Nice to see Lars-Erik Sjoberg and Ab McDonald get the nod as the next inductees to the Winnipeg Jets Hall of Fame. Sadly, both have left us, but I’m sure there’ll be a celebratory mood when some of the old boys gather to salute the two former captains on Feb. 26 at the Little Hockey House On The Prairie.

According to Forbes magazine, the Winnipeg HC franchise is now valued at $415 million, 27th among NHL clubs. Considering that Puck Pontiff Mark Chipman and co-bankroll David Thomson paid $170 million for their play thing, that’s a handsome hike. Mind you, it’s expected they’ll also be required to fork over $170M to Patrik Laine by the time he’s finished.

If you missed it, here’s how Forbes lists the value of each Canadian franchise: Tranna Maple Leafs $1.35 billion, Montreal Canadiens $1.3B, Vancouver Canucks $735 million, Edmonton Oilers $540M, Calgary Flames $450M, Ottawa Senators $435M, Winnipeg HC $415M. And, yes, now that you mention it, I don’t see how in the name of Cyclone Taylor the Jets can be worth less than the dysfunctional Senators. That’s like saying a pack of smokes is a better buy than gym membership.

This from Bruce Arthur of the Toronto Star: “Not to overreact, but Auston Matthews is probably the best goal-scorer in the world. This isn’t a hot take; it’s maybe a take that you left in the microwave for like 15 seconds, long enough to soften butter but not melt it.” Sorry, Bruce, but that’s a totally hot-buttered Tranna take.

Interesting to see loose cannon head coach John Tortorella adorned in a hoodie rather than a suit and tie behind the Columbus Blue Jackets bench last week. Apparently he was fit to be tied after the game, though.

When did women’s curling become more interesting and more entertaining that the men’s side? And does the curling season really begin before Vic, Cheryl and Russ are in the booth? No knock against Sportsnet’s coverage of Grand Slam events, but it just sounds right when Vic Rauter, Cheryl Bernard and Russ Howard are making the calls on TSN.

Is it just me, or does anyone else find TSN’s UFC gab guy Robin Black kind of creepy? I think he might be related to the Munsters. Maybe a distant cousin to Herman or Lily. Or separated from Eddie Munster at birth. Black might know his stuff (although anyone who picked Conor McGregor to whup Floyd Mayweather is suspect), but do we really need to see him rolling around inside the octagon? I know I don’t.

Interesting that Winnipeg Blue Bombers offensive coordinator Paul LaPolice took his name from the Tranna Argonauts head-coaching hunt. Not surprising, though. I mean, working in The Republic of Tranna is the Canadian Football League equivalent of a witness protection program. The 50/50 draw is larger at a backyard barbeque in Fort Garry than at BMO Field in The ROT. I could see Coach LaPo defecting to B.C., but Tranna? Only on a dare.

And, finally, forestry and lands people have discovered a hole the size of a CFL field in a remote B.C. park. It’s believed to be the biggest opening in North America now that Ondrej Pavelec has taken his five-hole back to the Czech Republic.