Alvin Brian McDonald, known to family, friends and on-ice foes as Ab, was among the latter.

If there was a nicer man in the game than Ab, I never met him, and that takes in 30 years worth of time and people on frozen ponds and in puck palaces across our vast nation.

From scrubs on skates to National Hockey League players, Ab had time for everyone, including news snoops who’d call him at home to pick his brain about anything from playing alongside Jean Beliveau to getting the Winnipeg Jets and the World Hockey Association off the ground in October 1972.

The return phone call was among the measuring sticks we would use in the rag trade. If they called you back, they were good guys. Ab unfailingly returned calls. Didn’t matter what time of day or night, he’d get back to you. In time for you to make deadline.

Frank McKinnon and Don Baizley were like that. The old goalie, Joe Daley, is too.

Frank and Baiz are gone, and now Abbie is, too. The Jets original captain died at age 82 on Tuesday night, and you know a pall has spread across the hockey community, most notably in Good Ol’ Hometown.

Ab was, in many ways, like the aforementioned Beliveau—a kind, gentle, engaging and obliging man. Respected and admired, he was a proud Winnipegger who left home to play hockey hither and yon but returned to River City each summer. There was a regalness about him, yet, at the same time, he had the carriage and touch of an aw shucks common man.

You’ll find that’s what folks will talk about today when they learn of Ab’s passing. 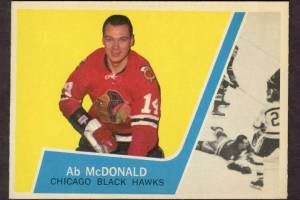 Oh, sure, they’ll also mention the Stanley Cup rings with the Montreal Canadiens (three) and Chicago Blackhawks (one), the Cup-winning tally against the Detroit Red Wings in 1961, his playing alongside Stan Mikita and Kenny Wharram to form one version of the Blackhawks fabled Scooter Line, and scoring the first goal in Jets history in New York (on the same night the youngest of his five children, Kristina, was born). They might also mention that the past two years have not been kind to the Scooters—Wharram passed away in 2017, while Mikita and Ab left us this year.

But there will be one common theme in all reflections—Ab the man.

Daley, in conversation with The Canadian Press, remembered his former teammate as “just a super nice guy who mentored a lot of the young guys, including me.” Ab was “very humble.”