I cannot survive in a 140- or 280-character world, so here are more tweets that grew up to be too big for Twitter…

To say Johnny Manziel’s debut as a starting quarterback in three-down, 12-man football was a disaster is to say the Hindenburg had a bumpy landing.

Seriously. This was bad. Hermann Goering had a better day at Nurenburg.

As first impressions go, this was your daughter’s high school prom date showing up at the door with a six-pack and hitting on her mom.

Johnny Football came, he saw, he did not conquer. He became Johnny Four Picks. He spent much of the night in flight, frantically trying to escape the clutches of large, angry men. I swear, we haven’t seen a man run this much since Forrest Gump decided to skedaddle across America.

Those expecting, or hoping, to see the second coming of Joe Theismann or Doug Flutie instead saw ample evidence that Manziel might be Vince Ferragamo the Sequel.

Ferragamo, in his brief fling with the Montreal Alouettes in 1981, never could quite figure out the 12th man on defence in the Canadian Football League, that guy who kept popping up like an uninvited house guest. That 12th man pilfered 25 of Vince’s passes. Manziel might toss that many picks by Labor Day.

None of this is to suggest that Johnny Four Picks was solely responsible for the 50-11 paddywhacking the Als absorbed at the hands of the Hamilton Tiger-Cats on Friday night at Percival Molson Stadium in Montreal, but let’s not sugar-coat what went down in his CFL baptism: He was gawdawful. Here’s the bottom line for the National Football League washout and former Heisman Trophy winner with Texas A&M: 20 tosses, 11 completions, 104 yards, 0 touchdowns, four interceptions.

Manziel finished the game where he should have started it—on the sideline. He was as unpolished as an old hobo’s shoes.

Apparently, this all escaped the notice of one TSN gum-flapper. Davis Sanchez, who loses credibility each time he parts his lips to allow unfiltered thought to become words, actually gave Manziel a passing grade in three of four categories.

“We’ll have to equate it to an SAT without really studying,” Sanchez said before handing out a report card that included a B (composure), a C+ (creativity), a C- (arm strength/accuracy), and one F (decision-making).

That’s like giving Neymar a gold star for staying on his feet for more than five seconds. Don’t we all wish we had Sanchez to grade our exams in school?

Sanchez wasn’t the only talking head at TSN to fluff up Manziel’s face plant on Friday. Jock Climie and Glen Suitor both tried to apply lipstick to that pig.

Here’s Suitor: “We have to temper our analysis. There were flashes. We saw him escape, we saw him create, we saw him improvise.”

Here’s Climie: “Is there a positive in this? It looked to me like Manziel was just going out there and learning. It looked to me like he stopped keeping score, which is the right thing to do. It didn’t matter, one, two, three interceptions…he just kept slinging it, because he’s learning the game. If he can keep that mentality, I think this could be a growing process. I think he will learn more from doing what he’s doing here than he will learn from sitting on the bench. I’m just saying, there could be a positive to this, and we did see some positives. Some of his flashes of brilliance, some of his scrambling around, I thought was impressive.”

It was left for two former quarterbacks, Matt Dunigan and Henry Burris, to tell the truth, the whole truth, and nothing but the unvarnished truth.

“After four practices, this is what you expect,” Dunigan growled when it was all over. “It’s a process that’s painfully long and it takes a lot of effort, more than four practices. This was fully expected. I don’t think they got anywhere down the road by starting him tonight.”

“You can’t speed up that process,” Burris sang in concert. “That was a bad decision by (Montreal). Vernon Adams should have been the starting quarterback.”

Most shameful comment about Manziel was delivered by old friend Rod Black, who, in his post-match analysis, said, “He’s faced a lot of adversity, let’s face it, in his life.” Oh, FFS, Blackie. Most of Manziel’s wounds have been self-inflicted, the product of booze, drugs, barroom brawling and leading a frat boy lifestyle. You want to talk about adversity? Talk about Colleen Crawley. That’s the woman Manziel beat up and threatened to kill.

Terrific piece in the Winnipeg Free Press by Mike Sawatzky about the night the Winnipeg Blue Bombers blew the doors off the aforementioned Ferragamo and a talent-laded Alouettes outfit, 58-2, in 1981. It’s a lengthy read but worth the time, because Sawatzky talked to all the key players and they provide delicious anecdotal insight.

I note that former defensive tackle Bryant Turner signed a one-day contract so he could retire as a Blue Bomber. Hmmm. I can think of plenty of guys I wish had only signed with Winnipeg FC for one day then got lost, starting with Jeff Reinebold. Actually, Jeff was a fun guy. He just wasn’t cut out to be a head coach.

Not sure what to make of Daren Millard’s departure from Sportsnet after 20 years. I remember him as a freshly scrubbed kid broadcaster in Winnipeg, and I believe it was Joe Pascucci who had the smarts to bring him from Brandon to River City. Daren is one of the truly good guys, and there were days when his voice of reason was the only thing that made Hockey Central at Noon bearable. Having said that, there were times last winter when I didn’t think his heart was in it. Perhaps having Damien Cox as a guest once too often sours a guy.

Also leaving his gig is Scott Campbell, who, for the past couple of National Hockey League seasons, has been scribbling good stuff about the Jets for the Free Press. Apparently Scotty is the victim of budget cuts, or the Drab Slab plans to spend its freelance coin in other areas. Perhaps they’ll use it to cover local sports other than the pro outfits in town. 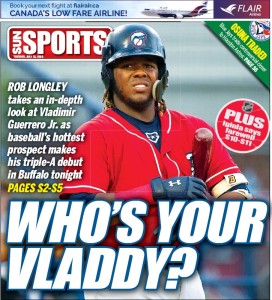 A week ago, I detailed how both the Freep and Winnipeg Sun had abandoned their own community, vis-a-vis local amateur athletes. Well, Exhibit A would be the July 31 edition of the Sun, which had 16 sports pages (including cover). Here’s the damning evidence of neglect:

Do the math and it adds up to seven of 16 pages devoted to athletes and outfits from the Republic of Tranna—in a Winnipeg newspaper!

Boffo stuff from John Lott of The Athletic Tranna on the Blue Jays unloading relief pitcher Roberto Osuna, who still faces a domestic violence charge: “Good riddance. Whatever their motives—and the tea leaves present murky messages—the Blue Jays did a good thing. Not because of the return they received in the trade, but because they rubbed out an unsightly stain on an organization looking for model citizens to lead their impending youth movement.”

The Houston Astros, who accepted Osuna in barter with the Blue Jays, claim to have a “zero tolerance” policy on domestic violence. As if. What the Astros have is “ninth-inning tolerance.” That is to say, as long as Osuna can get batters out in the ninth inning and help them win another World Series title, they don’t care if he hits women.

This is rich: Jerry Jones has threatened to fire any of his Dallas Cowboys who stay in the lockerroom or take a knee during the playing of the American national anthem prior to NFL games, yet he’s been observed talking and yukking it up, also wearing a Cowboys ball cap, while the Star Spangled Banner played at practice. Dallas sportscaster Dale Hansen called out the Cowboys owner for his hypocrisy.

And, finally, best quote of the week came from former Calgary Flames radio play-by-play guy Peter Maher, a very nice man who had this to say about now-retired forward Jarome Iginla’s 60-plus fights in the NHL: “I think he won them all. At least he did on the radio.”