Sports Santa is back in town and the jolly, ol’ boy isn’t so jolly this year. He’s actually in a bit of a snit. So tell us, Sports Santa, what do you have for the girls and boys in the toy department, a large lump of coal or a nice gift for those who scored big in 2016?

COAL: Mike O’Shea. The Winnipeg Blue Bombers head coach deserves the entire coal bin, not just a lump or two. Where do we begin? It took him five games to realize that Drew Willy was a complete washout as a starting quarterback, he shows nothing but contempt for the media, he made an epic, boneheaded blunder that cost the Bombers any chance of winning the only Canadian Football League playoff game he’s coached in three seasons, then he went on record as saying he’d make the same epic, boneheaded blunder again if given the opportunity. Sigh.

GOAL: Justin Medlock. The guy hoofed 60 field goals, a CFL record, but he’ll be remembered as the victim of O’Shea’s playoff brain fart. Asked to kick a 61-yard FG in the dead air of B.C. Place Stadium to preserve the Bombers’ Grey Cup aspirations, his attempt fell seven yards short of the target. He doesn’t take the rap, though. O’Shea does for asking his kicker to do the impossible.

GOAL: Matt Nichols took the ball that O’Shea was ordered to hand him and ran and passed it all the way to the playoffs, putting together a 10-3 record after taking over from Willy as the starting QB.

COAL: I put plugs in my ears, so someone please tell me that Paul Maurice has finally stopped squawking about the Winnipeg Jets’ schedule. The head coach provided his workers with a built-in excuse for failure with his constant, oh-woe-is-me carping about the grind foisted upon them by National Hockey League schedule-makers. Coach PoMo’s pity party was pathetic.

GOAL: What’s not to like about the Jets’ Lickety-Split Line of Patrik Laine, Nikolaj Ehlers and Mark Scheifele, or as I call them Puck Finn, Twig and Rink Rat? The Lickety-Split Line should be terrorizing NHL defenders and goaltenders for the next dozen years. Mind you, with Maurice pulling the strings behind the bench, forward combinations last about as long as a Grade One kid’s attention span. He might have them split up before New Year’s Eve.

COAL: When Jacob Trouba and his agent went public with their trade request and the young defenceman chose to stay home rather than attend Jets training camp, teammate Mathieu Perreault branded him “selfish.” Perreault should flap his gums less and do more of what he’s paid to do—produce points. The overpaid and underachieving forward has a whopping seven points (two goals). Stop my beating heart. 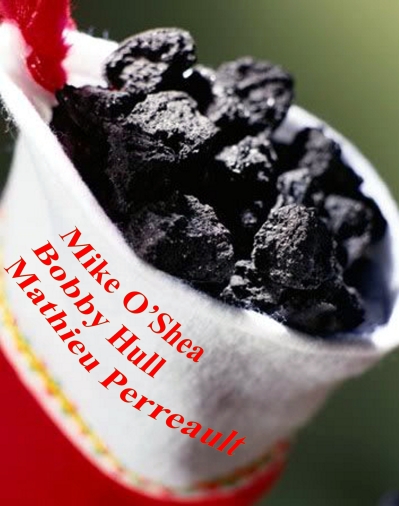 COAL: He’s among my favorite scribes, but Paul Wiecek of the Winnipeg Free Press totally lost the plot with what came across as a personal attack on Trouba, rather than reasoned analysis. Among other things, Wiecek called him a “malcontent” and “impetuous” and “the biggest loser” and chided him for his “petulance” in requesting a trade and holding out. Well, excuse me, but Trouba was merely exercising his bargained-for right as a restricted free agent. It’s fair to question his decision, but we can do without the schoolyard insults. Wiecek is better than that.

GOAL: I’m told Kirk Penton is riding off into the sunset. The best CFL beat guy in the country, Penton leaves the Winnipeg Sun at the end of the year, and that’s a huge blow to the tabloid. No word on where Kirk is headed, but he’ll be a success wherever he lands.

GOAL: He didn’t appear in the Sun sports pages often enough, but the now-retired Cam Cole of Postmedia will be missed. His copy was golden.

COAL: Postmedia has ransacked the sports writing biz in Canada, with its non-stop stream of force-outs and buyouts of people like Cole, Penton and George (Shakey) Johnson, among others. Postmedia has also left the country with exactly one two-newspaper town west of the Republic of Tranna. That would be Winnipeg, where the Sun and Freep still try to beat the other guy to the story.

COAL: Steve Simmons of Postmedia said Kevin Durant had “no spine” and it was “gutless” of him to sign with the Golden State Warriors. He told both pro golfer Brooke Henderson and Toronto Blue Jays pitcher Marcus Stroman to “grow up.” He repeatedly has called people “idiots” and engaged in childish hissing contests on his Twitter feed. Seems to me that there’s a soon-to-be 60-year-old sports scribe who should take his own advice and “grow up.”

GOAL: Bravo Desiree Scott. The Winnipeg-born midfielder.made her 100th appearance for Canada in international soccer in February (the 15th woman to do so) and she helped our Olympic side earn a bronze medal at the Rio Summer Games. Desiree and her gal pals beat Germany, France, Australia and Brazil, all ahead of them in the world rankings.

GOAL: Executive director Mo Glimcher retired after 41 years with the Manitoba High Schools Athletic Association. I remember dealing with Mo when I worked at the Winnipeg Tribune in the 1970s. Great guy.

GOAL: Although she was wearing Alberta colors, Chelsea Carey did Manitoba proud when she skipped her Wild Rose Country team to the Scotties Tournament of Hearts title. Chelsea, the daughter of Dan Carey, was groomed on the curling rinks of Winnipeg.

GOAL: A tip of the bonnet to the Puck Pontiff, Mark Chipman, for bringing the Heritage Classic to Winnipeg and linking the current Jets franchise to the roots of professional hockey as we know it in River City.

COAL: The Puck Pontiff blew it when he didn’t make original Jets franchise founder Ben Hatskin the first inductee to the Winnipeg Jets Hall of Fame. The late, great Lars-Erik Sjoberg, who wore the C during the Jets glory years in the World Hockey Association, also should have been among the first group to be enshrined.

COAL: Bobby Hull refused to join Anders Hedberg and Ulf Nilsson at a ceremony to salute the first three members of the Jets Hall of Fame. What a drip.

GOAL: Kyle Walters did boffo business in the CFL free-agent market, purchasing seven free agents at the opening bell. Justin Medlock was the pick of the litter.

GOAL: Old friend Ed Tait bolted from the Winnipeg Free Press toy department to the Blue Bombers, where he’s made the CFL club’s website sing with his fine prose.

GOAL: Mr. Everything with the Brandon Wheat Kings, Kelly McCrimmon, moved to Las Vegas, where he sits at the right hand of general manager George McPhee with the NHL expansion outfit.

GOAL: Winnipeg Goldeyes are rulers of all they survey in baseball’s American Association. The local nine has brought two titles to River City this decade.

COAL: Goldeyes owner Sam Katz took a cheap shot at the Bombers and Jets for their lack of success. Such a shame to know you’re still a total drip after all these years, Sammy.

Patti Dawn Swansson has been writing about Winnipeg sports for 46 years, longer than any living being. Do not, however, assume that to mean she harbors a wealth of sports knowledge or that she’s a jock journalist of award-winning loft. It simply means she is old and comfortable at a keyboard (although arthritic fingers sometimes make typing a bit of a chore) and she apparently doesn’t know when to quit. Or she can’t quit. She is most proud of her Q Award, presented in 2012 for her scribblings about the LGBT community in Victoria, B.C., and her induction into the Manitoba Sportswriters & Sportscasters Association Media Roll of Honour in 2015.