The Winnipeg Blue Bombers have given head coach Mike O’Shea a new set of downs (three years worth) and general manager Kyle Walters is good to go for another four Canadian Football League seasons. To discuss this development, I bring in my two Gridiron Girls who, when last seen, were at the Grey Cup game in the Republic of Tranna but disappeared somewhere into cyberspace. 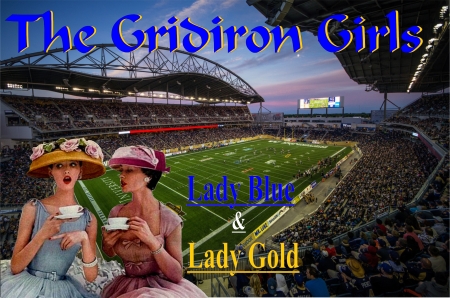 Lady Blue: Well, I guess it’ll be a very merry Christmas in the Walters and O’Shea households this year now that they’ve got those spanking, new contracts.

Lady Gold: Nobody should be surprised that the Bombers have re-upped both the head coach and general manager, because the club showed substantial improvement in the final two-thirds of this past season. But giving O’Shea three years instead of two? What’s that all about?

Lady Blue: Beats me. The guy in the short pants is 23-31, so I guess his first two seasons on the sideline were like the tree falling in the forest—it didn’t really happen. It’s like Walters and CEO Wade Miller based everything on the final 13 games of the 2016 crusade, when the Bombers went 10-3. They conveniently ignored the first 41 games of O’Shea’s sideline stewardship, when he was 13-28.

Lady Gold: I’m okay with O’Shea coming back, but if 23-31 and losing your one and only playoff game—after leading by 19 points!—is worth a three-year reward and probably a raise in pay, what do they give him if the Bombers actually accomplish something worth shouting about? You know, like ending a 26-year Grey Cup drought.

Lady Blue: I guess he’ll get a lifetime contract and a statue right beside the bronze Bud Grant outside Football Follies Field in Fort Garry. I wonder if the guy who sculpts the O’Shea statue will have him wearing short pants.

Lady Gold: Wouldn’t they make quite the pair? A bronzed Bud Grant in his trademark trench coat and O’Shea right beside him in a pair of baggy, bronze shorts. I know which one I’d poop on if I was a pigeon.

Lady Gold: I guess it was. Mea culpa, mea culpa, mea maxima culpa. It’s just that I don’t understand how O’Shea’s record warrants a three-year contract. Seriously, if 23-31 and no playoff victories earns you that kind of security, the guy basically has become the Bombers coach-for-life. I agree with you that Miller and Walters based everything on 13 games and turned a blind eye to O’Shea’s most glaring gaffes.

Lady Gold: And let’s not forget the lamentable 61-yard field goal attempt that ended the Bombers’ season in Vancouver. And to think, given the same scenario, O’Shea says he wouldn’t do anything different. He’d still put his team’s fate on the left leg of Justin Medlock, knowing full well that no one has ever hoofed a 61-yard field goal in B.C. Place Stadium. He’d do the same dumb thing.

Lady Blue: That decision rated a 10 on the dumb-o-metre. Dumbest call ever. Ever.

Lady Gold: Worse than what Dave Dickenson did in the Grey Cup game? I mean, the Calgary Stampeders were two yards away from winning and he takes the league’s Most Outstanding Player, Bo Levi Mitchell, out of the game and puts the ball in a rookie, third-string quarterback’s hands. And he doesn’t give it to the league’s leading rusher, Jerome Messam. That’s a massive brain fart.

Lady Blue: I still say O’Shea’s decision to attempt a 61-yard field goal rather than gamble on third-and-four was the dumbest coaching decision ever. Except maybe Marc Crawford’s refusal to tap Wayne Gretzky on the shoulder to take part in the shootout at the Nagano Olympic Games.

Lady Gold: Pete Carroll’s call that cost the Seattle Seahawks the 2015 Super Bowl was epicly dumb, too. O’Shea’s not the only coach to ever wear a dunce cap.

Lady Blue: What bothers me most is that O’Shea didn’t learn anything by his mistake. He’d do it again. Isn’t that the definition of insanity?

Lady Gold: Something like that. But let’s move on to another pertinent issue: Matt Nichols. Do the Bombers bring him back at any cost?

Lady Blue: Did you hear Walters’ answer to a variation of that question at the presser on Friday? It took him half a dozen seconds of silence before he managed to mumble, “Um.” He says he’s “cautiously optimistic” that Nichols will re-up, but he also says there are Plans B-C-D…all the way to Plan Z if Nichols bolts. The head coach has already proven to be quarterback blind, so I shudder to think what Plan B is and I’m horrified at the thought of Plan Z. That might include 81-year-old Kenny Ploen or a Ouija board to summon the spirit of Jack Jacobs.

Lady Gold: I can’t imagine there’d be much of a market for Nichols.

Lady Blue: Toronto needs a starting quarterback because Ricky Ray has become as brittle as burnt toast and Drew Willy is a washout. Montreal is still looking for the heir to Anthony Calvillo’s throne. But the coaching/management situation in both those towns is iffy. Nobody knows who’ll be minding the store. If Nichols arrives at free agency, those are his likely landing spots. Saskatchewan might need a QB, but I doubt Chris Jones would be interested in him. He didn’t want him in Edmonton, why would he want him on the flatlands?

Lady Gold: What about the cost, though? He’s asking for $450,000. That’s a stiff sticker price for a guy who hasn’t won anything.

Lady Blue: It’s either that or they break out the Ouija board and talk to ghosts. Pick your poison.

Lady Gold: I’m guessing that Nichols re-ups. He’s got a good thing going here. He’d have to reinvent himself all over again in Montreal or Toronto.

Lady Blue: I hope you’re right. Anyway, time to go. Got some last-minute shopping to do.

Patti Dawn Swansson has been writing about Winnipeg sports for 46 years, longer than any living being. Do not, however, assume that to mean she harbors a wealth of sports knowledge or that she’s a jock journalist of award-winning loft. It simply means she is old and comfortable at a keyboard (although arthritic fingers sometimes make typing a bit of a chore) and she apparently doesn’t know when to quit. Or she can’t quit. She is most proud of her Q Award, presented in 2012 for her scribblings about the LGBT community in Victoria, B.C., and her induction into the Manitoba Sportswriters & Sportscasters Association Media Roll of Honour in 2015.