I’ve never met Kyle Walters, but, based on his most recent thrust and parry with news scavengers, he strikes me as a man who hasn’t had a bowel movement in about a week.

I mean, that wasn’t a press conference the Winnipeg Blue Bombers general manager had after dispatching Drew Willy to the Toronto Argonauts. It was a root canal. Without anesthesia. At times, his facial expressions suggested someone was squeezing his left testicle.

Like when Paul Friesen of the Winnipeg Sun tossed out this question:

“What do you say to fans who wonder about your ability to produce, develop, find a long-term solution at quarterback?”

“You’re questioning my competence I guess is what you’re asking?” he then said.

Ouch. A wee bit touchy, are we Kyle?

I suppose that’s understandable, though. After all, shipping his high-salaried, backup QB to the Boatmen was a concession that Walters’ and head coach Mike O’Shea’s handling of Willy was a badly botched experiment. They treated him as a quarterbacking messiah, even though he was still as green as St. Patty’s Day when he arrived in River City, and they coddled and stood by Willy even as Matt Nichols outperformed him at training camp this summer.

That was the most shocking and disturbing sound bite that surfaced in Walters’ chin-wag with the Fourth Estate the other day. He, like so many others, recognized that Nichols was the superior quarterback, yet he and O’Shea went with the inferior guy. Their guy.

So why the hell wasn’t Nichols starting from the get-go? Why did we have to wait until this Canadian Football League crusade was on amber alert before we saw Nichols behind centre?

Because the Bombers braintrust is quarterback blind, that’s why.

Based on evidence gathered to date, Walters and O’Shea wouldn’t know a quarterback if they saw Tom Brady and Peyton Manning playing catch in Matt Nichols’ back yard. Perhaps that explains why they don’t have a QB under contract beyond the end of November.

Go ahead and challenge Walters to name his starting quarterback for 2017. He can’t. But they can in Regina and Calgary and Edmonton and B.C. Among the CFL West Division outfits, only in Winnipeg do they not have a QB clue.

And yet Walters gets his back up when asked a fair question about a long-term quarterbacking solution for the Bombers. Good grief, man.

Paul Friesen wasn’t questioning Walters’ competence, but someone should when it comes to QBs.

Friends, family and fans will gather to swap stories and tell lies about one of the genuinely elite guys, Ab McDonald, on Thursday night at the Victoria Inn out by the airport in St. James. They’re calling it an 80th birthday bash, but it’s all in support of Special Olympics, an organization near and dear to McDonald’s heart. Ab was always one of my two go-to guys whenever I needed a comment about the Winnipeg Jets, the other being Joe Daley. The first Jets captain and the man who scored the first goal in franchise history, Ab is engaging and obliging and quick to deliver a thoughtful quote. I always considered him to be a gentleman of the Jean Beliveau ilk. 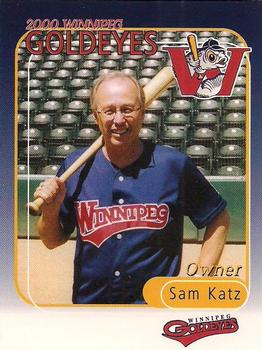 I found Sam Katz to be somewhat less than sincere and a phony in his dealings with us at the Winnipeg Sun during my dozen or so years with the tabloid. So much so, that I once imposed a moratorium on all Sam Katz interviews because he wasn’t to be believed. That’s why I oft referred to Sammy in print as the Unmentionable Man. I will say this for him, though—he has delivered as owner of the Winnipeg Goldeyes. The Ballyard by the Forks is a beautiful facility and the Fish have established a tradition of baseball excellence. They’re in another final, this time against the Wichita Wingnuts in the American Association, and if Sammy’s boys pull it off it’ll be a third title for the franchise. So I have two words for you this morning, Sam (not the same two words I once used to describe you): Go Fish!

Dave Hodge must have passed out the stupid pills before the latest edition of The Reporters on TSN this week, because Michael Farber and Steve Simmons went deep into the dumb barrel.

First, Farber said, “Colin Kaepernick has essentially become Rosa Parks.” What the fudge? That just might be the stupidest comment I’ve ever heard from an intelligent man and an excellent writer. Rosa Parks was arrested, fingerprinted and spent a day in jail for refusing to surrender her seat to a white man on a bus in Montgomery, Ala., in 1955. On the police report, arresting officers listed her nationality as “Negro,” not American. The incident sparked a 13-month bus boycott, brought Martin Luther King Jr. on board and gave rise to the civil rights movement in the United States. Mrs. Parks also lost her job as a seamstress, she was arrested a second time for her role in organizing the boycott, and she felt obliged to leave town.

And what has Kaepernick been forced to endure for his refusal to stand for the Star-Spangled Banner before National Football League games? Scorn from divas like Kate Upton. That’s right, a supermodel has tsk-tsked him. Such a hardship for the San Francisco 49ers backup quarterback to bear. How will he survive?

Colin Kaerpernick is no Rosa Parks. Shame on Farber.

Not to be outdone, Postmedia’s Simmons doubled down on dumb with a nonsensical rant about the recent U.S. Open tennis championships saying, “I hate any tournament that Serena Williams doesn’t win and I hate any tournament when (Novak) Djokovic isn’t right in there and fighting for a championship. In this case, Serena wasn’t herself, he wasn’t himself, and we get a B winner so to speak.”

Well, let’s see. Angelique Kerber won two Grand Slam events this year (U.S., Australia) and was in a third final (Wimbledon). She’s ranked No. 1 in the world among female players. This is a “B” winner?

I now direct your attention to the men’s side, where Stan Wawrinka prevailed over Djokovic in the championship match. Wawrinka has won more Grand Slam tournaments since 2014 than Rafael Nadal (1), Andy Murray (1) and Roger Federer (0). Only Djokovic’s six GS titles is better than Wawrinka’s three in that time frame. In each of his Grand Slam victories, he has defeated the world No. 1-ranked player in the final. Only one player, Djokovic, has won more titles this year and over the past three years. Wawrinka is ranked No. 3 in the world. This is a “B” winner?

I was waiting for someone on the panel or host Hodge to challenge Farber and Simmons, but no. They were given a free pass. Wouldn’t want to ruffle any feathers, would we now?

Which has long been my one complaint about The Reporters: It has no bite, no edge. It’s just four buddies agreeing with each other, even when they say really, really dumb things.

Patti Dawn Swansson has been writing about Winnipeg sports for 46 years, longer than any living being. Do not, however, assume that to mean she harbors a wealth of sports knowledge or that she’s a jock journalist of award-winning loft. It simply means she is old and comfortable at a keyboard (although arthritic fingers sometimes make typing a bit of a chore) and she apparently doesn’t know when to quit. Or she can’t quit.
She is most proud of her Q Award, presented in 2012 for her scribblings about the LGBT community in Victoria, B.C., and her induction into the Manitoba Sportswriters & Sportscasters Association Media Roll of Honour in 2015.